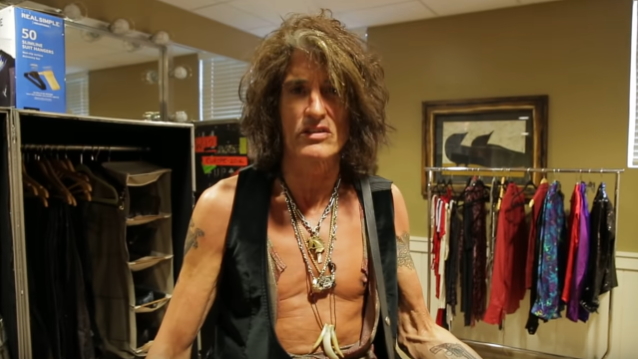 During an appearance on today's (Wednesday, July 6) episode of SiriusXM's "Trunk Nation With Eddie Trunk", AEROSMITH guitarist Joe Perry was once again asked about the possibility of a follow-up to to the band's "Music From Another Dimension!" album, which came out a decade ago. He said (as transcribed by BLABBERMOUTH.NET): "For a long while after that record came out, I thought… 'Cause we put everything on that — every riff that we had lying around. Then I was thinking, 'Why bother?' We've got all this other material that we need to release that the fans, I think, would love to hear — different versions of 'Dream On', studio quality. But you never know. I mean, Steven [Tyler, vocals], our villas are, like side by side, in Vegas [during AEROSMITH's Vegas residency]. So you never know. If you've got some inspiration, it doesn't take long to write a song. Whether it's great or not, you don't know. But all I can say is you never know. I would hate to think that was the last one. But we've got so much stuff out there, it's hard to think about trying to do something new. But what the hell? You never know."

"Music From Another Dimension!" was released when AEROSMITH's label, Columbia Records, was reportedly going through a leadership change, and it ended up becoming a commercial disappointment.

A little over a month ago, AEROSMITH announced that Tyler had entered a treatment program following a recent relapse, prompting the band to put their Las Vegas residency on a temporary hold.

Sources close to Steven told TMZ last week that he checked out of a facility at the end of June, and actually stayed longer than the 30 days he was originally supposed to. The tabloid site reported that the singer is "totally clean and sober, and looks good physically too — he's at a healthy weight and his skin looks great."

Kramer's wife Linda Gail Kramer died on June 22 at the age of 55. No cause of death has been revealed.