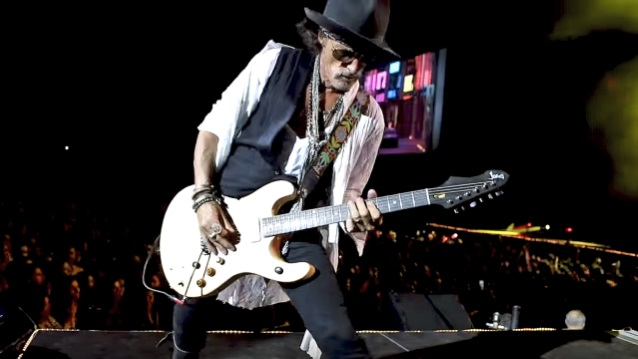 Joe Perry has told Yahoo! News that he would "really like to put some music together" with his AEROSMITH bandmates for a possible follow-up to 2012's "Music from Another Dimension!" album. "Steven [Tyler, vocals] and I have talked about it in general, because we both have things going on [Tyler released a country solo album in 2016], but I think there's some time we'll carve in there to get together," he said. "Even if it's a couple of songs, it would be good to get something new out, so we'll see."

Perry also revealed that AEROSMITH has "used every tool available to man to figure out how to get along" and stay together, including taking part in the same type of group counseling sessions that METALLICA attended during the making of the latter band's "Some Kind Of Monster" documentary. "That METALLICA thing that they did, it was pretty cool that they filmed it and all that, but that was like old news for us at that point," Perry said. "Over the years, we've had to seek professional help. We grew up together. We were kids, had this idea to do this, and living in an apartment together. You grow up, you know. You have relationships, marriages, kids, so everybody's interests started to spread out, but the vision of doing the band, we still feel that. But sometimes it's really hard to reconcile people's differences, so sometimes you're going to talk to somebody." He added: "We haven't needed that for a while. We should probably be writing books on it now! But I think that's another thing we've outgrown."

"Music From Another Dimension!", was released when AEROSMITH's label, Columbia Records, was reportedly going through a leadership change, and it ended up becoming a commercial disappointment.

The lackluster response to the disc later caused two bandmembers — Perry and drummer Joey Kramer — to question whether there's any point in AEROSMITH making future albums.