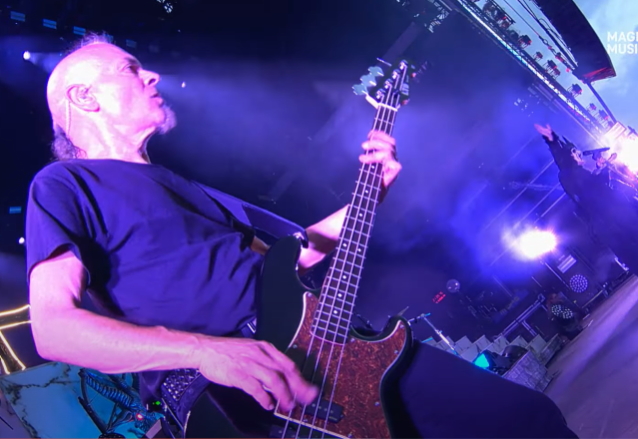 Bassist Joey Vera will sit out the upcoming U.S. tour from reformed Danish metal legends MERCYFUL FATE due to a scheduling conflict with his longtime band ARMORED SAINT.

Earlier this month, MERCYFUL FATE announced its first North American headlining tour in over two decades. The journey, which will feature support from by KREATOR and MIDNIGHT, will commence on October 25 in Dallas, Texas and weave its way through fourteen cities, closing on November 16 in Atlanta, Georgia. The tour follows the band's stunning headlining performance at this year's edition of Psycho Las Vegas.

Earlier today (Tuesday, September 27),Joey released the following statement via social media: "My dear friends: As some of you have done the math and checked your calendars, you may have noticed that it appears as though I've scheduled myself to be on two tours at the same time this Fall. As most of you know, I have been promoting the tour with ARMORED SAINT supporting WASP for almost a year now. A tour I committed to in 2021 and Never You Fret, I am standing by that commitment.

"No thanks to the results of Covid affecting nearly every aspect of the touring industry, touring schedules have since been cancelled and moved to different times in the year. Recently, MERCYFUL FATE received a touring opportunity that was impossible to turn down. Unfortunately, this schedule conflicts with my tour in the fall with ARMORED SAINT. So, it pains me a great deal that I cannot be in two places at one time, because If I could, I most certainly would.

"Over the past 3 months I have been welcomed into the MERCYFUL FATE family with open arms, and this includes all of the fans. I have made new lifelong friends and have had the most amazing time this summer performing with these great musicians onstage and of course for you, the fans. These MERCYFUL FATE shows have been some of the most incredible gigs I've ever been a part of.... ever. I have also been asked to be a full member in the MERCYFUL FATE band for touring and recording their next record, and I have accepted. However, I regretfully have to sit out this upcoming Fall Tour in the USA and S. America.

"Since the show must go on, I hope you will welcome with open arms my stand-in bassist for the MERCYFUL FATE fall tour, Becky Baldwin, who also plans to play the MERCY music with honor and respect to our fallen brother Timi Hansen, just as I have tried to do. I know many of you have seen the live clips on YouTube but I promise you, this is a show you will have to see in person to believe. Prepare yourselves to be completely blown away.

"I will miss my brothers and our crew in MERCY this fall, but I'm very much looking forward to playing with my mates in ARMORED SAINT again and of course seeing all of you on our upcoming fall tour. See ya down front!

"In closing, if I may borrow King Diamond's sign off, 'Stay Heavy!'"

Please welcome, Becky Baldwin Bass who will be standing in on bass for Joey Vera. Here she is rehearsing “Come To The Sabbath”.