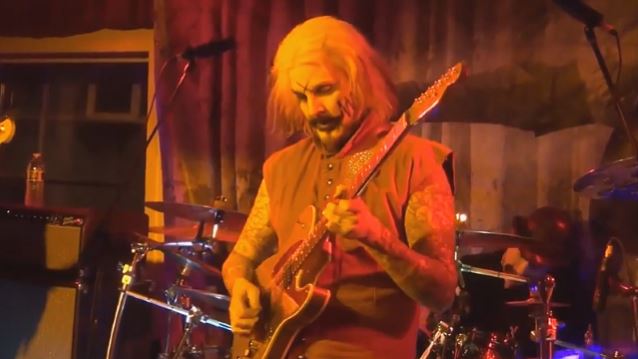 JOHN 5 Talks To IN THE NOW Magazine About 'Careful With That Axe' Album, Solo Tour (Video)

Brett Tully of In The Now Magazine recently conducted an interview with former MARILYN MANSON and current ROB ZOMBIE guitarist John 5 (real name: John William Lowery). You can now watch the chat below.

JOHN 5 & THE CREATURES are currently touring in support of John 5's eighth solo album, "Careful With That Axe", which was made available on August 12, 2014 through 60 Cycle Hum. The effort features Rodger Carter on drums and Matt Bissonette on bass.

JOHN 5 & THE CREATURES' setlist includes not only several songs from "Careful With That Axe", but also material from each of John 5's previous solo efforts.

Speaking to Revolver magazine, John 5 stated about "Careful With That Axe": "It's really exciting for me, because this is what I think music is really about. I fund this whole thing by myself and I don't do it for money; it's just for the love of the guitar. I think people really understand that.

"I've been doing instrumental records now for a long time and built up this little fan base which is worldwide and it's incredible how big it's gotten. People really enjoy these records. Even the title, 'Careful with That Axe', when you get a guitar when you're a little kid, you don't know where that guitar is going to take you — if it's going to bring you happiness or sadness, success or poverty."

Asked how he continuously finds inspiration to write new music, John 5 said: "I always look for inspiration. If I find something that's inspiring, I'm so excited, because it is very hard to find something inspiring. I can get inspired, like anyone, from movies or music or TV or a certain way people think. I've always liked people that were obsessive with something. I love watching documentaries on people like 'clean freaks,' because it's just so interesting to me for some reason. [Laughs] Sounds weird, but it's the truth."