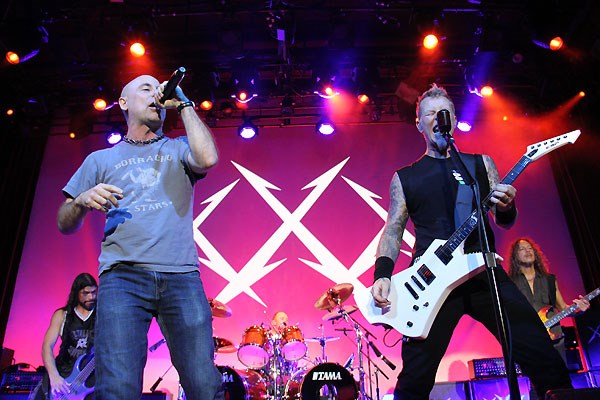 JOHN BUSH: 'It Wasn't My Destiny To Be In METALLICA'

Former ANTHRAX and current ARMORED SAINT singer John Bush was recently interviewed by Howie D. from Hard Edge Radio and National Rock Review. You can now listen to the chat using the audio player below.

Asked if he ever regretted not joining METALLICA when he was asked to sing for the band in the early '80s, Bush responded: "It's something that always resurfaces in my life, and I find it funny.

"I don't think that was my fate and my destiny to ever be the lead singer in METALLICA, albeit I was thoroughly… I felt complimented, obviously, needless to say, back in the day when the band was proposing the idea to me."

He continued: "You know, we became really good friends with those guys, we toured with them. ARMORED SAINT just recently, a few years ago, did the 30th-anniversary show that METALLICA did in San Francisco when they honored their fan club; we opened it, then I got on stage and did 'The Four Horsemen' with them [see video below]. So there's a lot of history there. But it just wasn't my destiny to be in METALLICA. I would have changed the face of heavy metal, and I don't need that pressure."

Bush added: "James Hetfield is an incredible vocalist — he really developed through the years — and I can't imagine anyone else there. So I always really say that, in my personal opinion, it would have been a much bigger mistake to not join ANTHRAX, because at that point, everything had already been kind of in motion. In the early days of METALLICA, what people don't understand is that even though METALLICA was garnering a lot of fame and attention, ARMORED SAINT was becoming this popular band in Los Angeles and we were doing well. So for me to go leave all the guys I grew up with and basically my band to join another band, it wasn't something that sounded appealing to me at that time, because we were doing well ourselves."

Bush, who fronted ANTHRAX from 1992 to 2005, also spoke about his time in that group and his current relationship with his former bandmates. He said: "All my associations with ANTHRAX are all positive. I feel like we made some cool records along the way and I'm really proud of them and we had a lot of history and a lot of experiences. So, to me, it's all good. It was a relationship that was… The time had elapsed and it was time to move on for both parties, and I think people are happy that Joey Belladonna's back in the band and ARMORED SAINT is a comfortable place for me to be. But it takes nothing away from what we did. I think we made some killer records, [1993's] 'Sound Of White Noise' being definitely one of the top ones — kind of an ahead-of-its-time record, I think, actually. So it's all good for me."

He added: "I just did a show for Scott's [Ian, guitar] wife Pearl's 40th-birthday party. He had a bunch of people play at a rehearsal hall in honor of her, and play a bunch of different songs, and Scott and I played 'Safe Home' together. So it was cool. I mean, I see Scott periodically through mutual friends, kids' birthday parties… you name it. So it's fine."