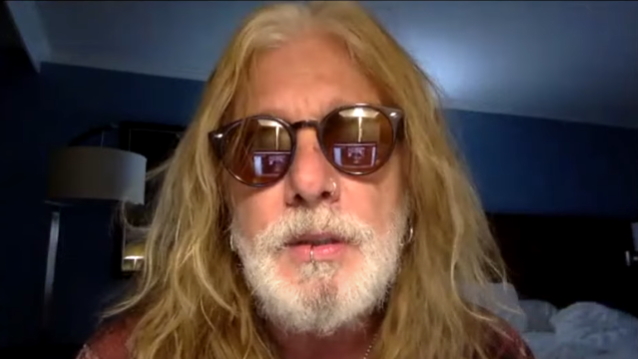 JOHN CORABI: 'I Learned A Very Hard, Valuable Lesson When I Was In MÖTLEY CRÜE'

In a new interview with The Rock Experience With Mike Brunn, former MÖTLEY CRÜE singer John Corabi was asked how he measures success. He responded (as transcribed by BLABBERMOUTH.NET): "I learned a very hard, valuable lesson when I was in MÖTLEY. Obviously, everybody knows what the [1994 self-titled] record did or didn't do. The tour was a nightmare. I was the new ingredient, and then I left. And the one thing that I learned was when I left the band, my phone stopped ringing. And it was kind of a harsh reality. I was the guy that was invited to all the parties, the backstage things, 'Let's go in a limo,' 'Let's do this,' 'Let's go to the Playboy mansion,' 'Let's do that,' and then the minute they made the announcement that Vince [Neil, original MÖTLEY singer] was back, if I wanted to have a message on my answering machine, I had to call myself. And it's weird. I just sat there and I went, you know what? It's really just about waking up in the morning, the fact that you wake up and you open your eyes, it's a good day; it's a healthy day.

"I have a small group — not a large group — but I have a small group of friends and family around me that are incredibly supportive of me, but they're also honest enough with me and just straightforward and we have a great relationship to the point where they can say to me, 'You know what, Crab? You're being a fucking idiot. Back the fuck up.' And I go, 'Okay. Mental check. Head check. Boom.' So I have a beautiful family around me."

He continued: "It's funny because sometimes I do look at things and I go, 'Okay, what am I doing wrong? Why can't I sell records? Why can't I be like Nikki Sixx? Or Steven Tyler? All these guys. Why am I not driving around in a Lamborghini?'

"I always tell everybody, if you can draw an imaginary straight, horizontal line and say everything above it is fame and everything below it is obscurity, I've literally been scraping my back on that line my whole career.

"But the MÖTLEY thing really made me look at the importance of, you know what? You do the best you can, fight for the things that you can change, fight for the things that you can make better, and then there's just some things, man, that are out of your control. You can't change it. I can't change the fact that when I was in [the pre-MÖTLEY band] THE SCREAM, I had no idea I was gonna get a call to join MÖTLEY. I had no idea that MÖTLEY was gonna bring Vince back. And I had no idea that my first record deal — and the MÖTLEY record — would come at the height of the music industry completely changing again."

Corabi added: "Honestly, it's the hand that I was dealt. I played it. I didn't win that hand. On to the next hand. And that's what I'm doing now, man. I just tell myself every day, I sit there and I go, 'You know what? Fuck, man. I've been doing this for 30-plus years.' There's guys that go through their whole life that don't get one record deal. I had one with THE SCREAM, one with MÖTLEY, one with UNION, THE DEAD DAISIES, even the solo [stuff]. So I'm, like, fuck, I've had five record deals and I'm still going, still releasing music, and people like you still wanna talk to me. So I went, 'You know what? Life's not that bad.'"