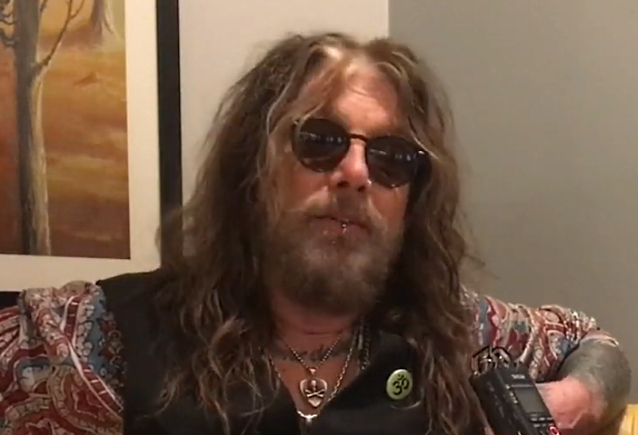 JOHN CORABI Looks Back On His Time With MÖTLEY CRÜE: 'The Universe Gave Me Something That I Needed' For Those Five Years

Ex-MÖTLEY CRÜE singer John Corabi says that the "universe" gave him something that he needed during his time with the band.

Corabi joined CRÜE in 1992 as the replacement for the group's original singer, Vince Neil, who was dismissed due to personal differences. With Corabi on vocals, MÖTLEY CRÜE released one critically acclaimed full-length CD, which ended up being a commercial failure in the wake of grunge despite a Top 10 placing on the album chart. When Neil returned to the fold in 1997, Corabi was left on his own.

John reflected on his time with CRÜE during a new interview with Dawn Osborne of TotalRock. He said (as transcribed by BLABBERMOUTH.NET): "I'm not a Bible thumper. I'm not a religious person, but I think that I look at things, in some ways, in a little bit of a spiritual way. And I kind of look at my way as I've been blessed with a lot of great things, but there was always something to follow up a great thing, there was a not-so-great thing that actually really… Now, in hindsight, I look at it and I go it was kind of a blessing because it kept me balanced. Had I gotten the MÖTLEY gig and nothing bad happened as well, maybe I would have went nuts; maybe I would have drank myself to death, or whatever. But there was always something happening. And I find it odd — and it took me a minute to think about it this way — but I found it odd that I was offered the gig in… it was February of 1992. And just prior to that, my mother had called to tell me that she was diagnosed with cancer, maybe a month or two. And then I was offered this gig. And with the gig came a lot of money. And then my mother passed away in, I believe it was December of '96, and then shortly after Vince came back.

"So I just sat there and I went, I got to meet Glenn Hughes and Brian Johnson and some of the [other] guys in AC/DC… I got to meet all these people, mainly my musician heroes, and they were super cool to me. And I was financially able to take care of my at-the-time… Joining MÖTLEY, I also got a divorce, but I was able to take care of my ex-wife and my kids. I took care of my mother. I took care of myself. So I just have a weird way of looking at it. I go, you know what? The universe gave me something that I needed for that five years. I needed that to take care of my son, who was a diabetic, ex-wife and my family. And then when my mom passed, it was, 'Okay, we're gonna take that back now. You don't need it anymore.'"

Corabi recently released his autobiography. Titled "Horseshoes And Hand Grenades", it was written with the help of MÖTLEY CRÜE historian/author Paul Miles, and was made available via Rare Bird Books.

In a 2016 interview with Sweden Rock Magazine, MÖTLEY CRÜE bassist Nikki Sixx said that writing the "Mötley Crüe" LP with Corabi was a prolonged and difficult experience. He went to call it "a very unfocused record" that was "painful for me, because John Corabi can't write lyrics, and I had to do all that work."