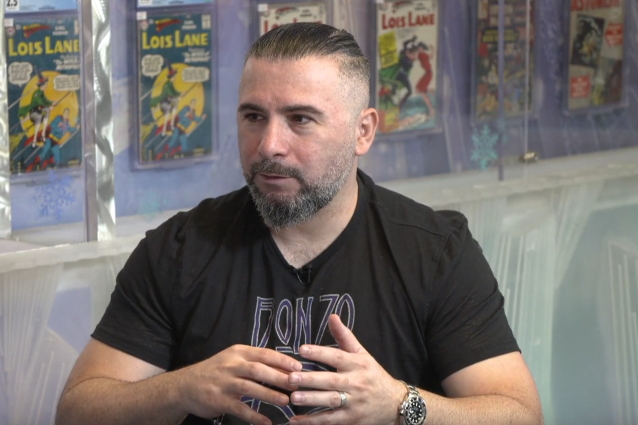 JOHN DOLMAYAN Says He Never Wanted SYSTEM OF A DOWN To Take A Hiatus: 'It Was A Disastrous Move For Us'

John Dolmayan says that he never wanted SYSTEM OF A DOWN to stop making new music and touring.

The Serj Tankian-fronted outfit has toured intermittently since ending its hiatus in 2011, but has yet to record a full-length follow-up to its "Mezmerize" and "Hypnotize" LPs, which came out in 2005.

"I never wanted SYSTEM to take a hiatus," he said (see video below). "I think it was a disastrous move for us, because we never reached our peak. I still feel like we have a lot of music in us. And as big as the band is — we're a massive draw internationally and here in the U.S. — I think we could have been the biggest band in the world. Why not achieve that if you have the potential?

"So I feel like, yes, SYSTEM is a great band. We have a great live show and I'm very proud of what we have achieved. But we got to here [points to a spot on the table]. We could have gotten to here [points to another spot further away]. It doesn't mean we still can't, but it's unlikely, because if you can't put your ego aside — you've gotta take that cloak off, your ego, and put it here — and get in a room and work together, and do what's best for the band. And if everybody isn't thinking of what's best for the band, the band has no choice. The definition of a band is the selflessness. That's what a society is, isn't it? We're all thinking, like, together we make something great. Alone, we might not even survive.

"So, for me, there's a lot of sadness associated with it, because [guitarist/vocalist Daron Malakian's solo project] SCARS ON BROADWAY is fine, Serj's solo projects are fine, but they're nothing compared to SYSTEM," he continued. "When we stopped, one more album, you're talking about a different conversation.

"At the end of the day, we achieved quite a bit. So our epitaphs are already written. My kids' kids will be able to say, 'That was my grandfather, and he was in this band. And look what they did.' And they'll be able to listen to that for as long as humanity exists, I guess.

"Anytime you don't reach your potential, it's a sadness," John added. "And by the way, our potential could have been to sell 10 albums. But if that was it, and we reached it, you can walk away saying, 'I did everything I could.' … That way you can spend the rest of your life happy. The worst thing is to be 50 years old, sitting in a room, doing something you're miserable doing, and knowing it's because of you — because you didn't have the balls to pursue it; you didn't have the balls to put everything into it."

A month ago, SYSTEM OF A DOWN released "Protect The Land" and "Genocidal Humanoidz", the band's first new songs in 15 years. The tracks were motivated by the recently erupted conflict between Artsakh and Azerbaijan, the latter aided by Turkey and accountable for the greatest violence the region has endured in 26 years. Produced by Malakian, who also wrote the music and lyrics, both songs are streaming now on all DSPs and are available for purchase on Bandcamp with band royalties earmarked for the Armenia Fund.

In 2018, Malakian publicly accused Tankian of not wanting to record, with Tankian responding that creative and financial issues with Malakian led to the stalemate. In a message on Facebook, Tankian wrote that Malakian wanted to control SYSTEM's creative process, take more of the publishing money and be the only band member to speak to the press.

In a recent interview with Guitar World magazine, Malakian was asked about the chances of more new music from SYSTEM OF A DOWN in the near future. He responded: "Look, I never say never. We didn't even know this was going to happen. I was on my way to releasing these songs with my other band SCARS ON BROADWAY. Then the situation in Armenia happened and put our differences aside. And our differences are only within the band.

"Personally and outside of the band, everybody gets along reasonably well. There is no hate for each other in SYSTEM OF A DOWN. We're like a family. A lot of people think, 'Oh, Serj and Daron don't get along!' and no, that's not true. Serj and Daron get along just fine. But Serj and Daron, or Shavo [Odadjian, bass] and Serj, different people in the band will have a different idea of how they want the band to move forward. That's kinda where our disagreements are at."

Pressed about whether there's a chance new music from SYSTEM OF A DOWN could happen, Daron said: "I never say never, but at the same time, I'm not expecting to do any more with SYSTEM OF A DOWN right away or immediately after this. It really does seem like our fans like these new songs. That's important to me.

"We've added two new songs to the SYSTEM catalog that are on the level with everything else that we've put out and our fans have accepted it that way, which means a lot to me. That's kinda where we're gonna leave it for now. If more happens later on, then we'll talk about that, but for now I will continue doing what I'm doing and everyone else will just continue what they're doing. It's all cool though, I'm really pleased with the response we got."