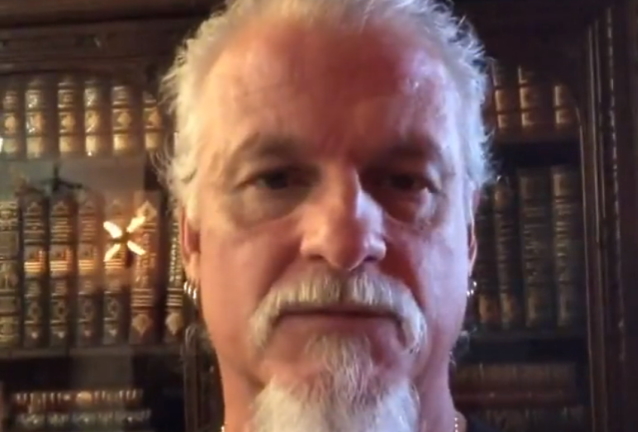 ICED EARTH guitarist Jon Schaffer, who pleaded guilty 13 months ago to his role in the Capitol riot, is continuing to cooperate with authorities while on pre-sentencing release.

In a joint status update filed last Wednesday (May 18) in federal court in Washington, D.C., Schaffer's attorney Andrew C. Marcantel of Attorneys For Freedom Law Firm wrote that Schaffer "remains on release under the supervision of the District of Columbia Pre-Trial Services Department. He has remained compliant with pre-trial release conditions. He has remained cooperative with law enforcement since his release." The attorney also asked for an "opportunity to file a further joint status update on or about October 28, 2022."

According to an April 2021 Justice Department press release, Schaffer has "acknowledged he is a founding lifetime member" of the right-wing Oath Keepers extremist group.

This past January, U.S. District Court Judge Amit Mehta granted the U.S. government's request to share sealed materials from the case involving Schaffer's role in the U.S. Capitol riot case as discovery to the three main Oath Keepers cases. Stewart Rhodes, the founder and leader of the Oath Keepers, and several of his deputies were charged with seditious conspiracy for their role in the U.S. Capitol Riot. Rhodes and his co-defendants are accused of bringing small arms to the Washington, D.C. area; engaging in combat training to prepare for the attack; and making plans to stage quick-reaction forces to support insurrectionists.

In December, a lawsuit was filed in federal court in Washington, D.C. accusing 31 members of Oath Keepers and the Proud Boys — including Schaffer — of "conspiring to terrorize the District" on January 6, 2021, calling their actions "a coordinated act of domestic terrorism." According to CNN, the lawsuit cites the Ku Klux Klan Act of 1871, a federal law created after the Civil War to protect civil rights and, as District of Columbia Attorney General Karl Racine noted, "to protect against vigilantes and insurrectionists."

The 84-page complaint, which can be found at this location, describes Schaffer as "a founding, lifetime member of the Oath Keepers." It goes on to say: "Schaffer was criminally charged and indicted for his role in perpetrating the January 6th Attack. In connection with a promise to cooperate with investigators and potentially testify in criminal cases related to the conspiracy to commit the January 6th Attack, Schaffer pleaded guilty to the entire Statement of Offense in the criminal action brought against him, which included two felony offenses: (1) trespass of the Capitol while armed with a deadly or dangerous weapon and (2) obstruction of an official proceeding of Congress. The Criminal Complaint filed against Schaffer—as well as Schaffer's Plea Agreement and the accompanying Statement of Offense describing his conduct—are publicly available documents that are hereby incorporated into the Complaint by reference."

"No one bore the brunt of this gutless attack more than the courageous law enforcement officers including the men and women of the DC Metropolitan Police Department who went into the fire and violence with one objective in mind: remove the violent mob and restore our country's fragile democracy," Racine said at a news conference.

"The defendants, as you know, were not tourists, nor were they acting patriotically," he added. "They were vigilantes, members of a mob, insurrectionists who sought to crush our country's freedoms."

As part of his April 2021 plea deal, Jon entered into a cooperation agreement with the government.

Also as part of the agreement, the Justice Department has offered to sponsor Schaffer for the witness protection program.

The 54-year-old musician was the first Capitol riot defendant to reach a plea deal.

At a November 2020 Donald Trump rally in Washington, D.C., Schaffer was videotaped walking behind a Florida couple, Kelly Meggs and Connie Meggs, who were accused of being among 10 members of the Oath Keepers to have played a leading role in the Capitol assault. According to federal authorities, Kelly and Connie Meggs plotted for weeks ahead of the attack, attended training sessions and recruited others. Kelly Meggs is the head of the Oath Keepers' chapter in Florida.

Jon Schaffer, the first Jan. 6 defendant to plead guilty and the first person with ties to the Oath Keepers to agree to cooperate w/ the feds, "has remained cooperative," per status report — no sentencing date means his cooperation agreement is still active pic.twitter.com/vH6I24Cl3u