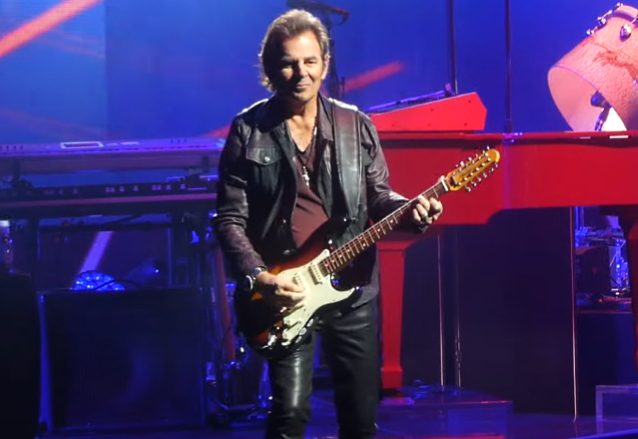 JOURNEY kicked off its U.S. "Freedom" tour on February 22 in Pittsburgh, Pennsylvania. The band's current touring lineup features bassist Todd Jensen, a veteran musician who has played for various artists, including the bands SEQUEL, HARDLINE and HARLOW, as well as David Lee Roth, Ozzy Osbourne, Steve Perry, Alice Cooper and Paul Rodgers. Also part of JOURNEY's current incarnation is returning drummer Deen Castronovo, who shared the drum duties in the band last year with Narada Michael Walden. Walden, bassist Randy Jackson and keyboardist/backing singer Jason Derlatka all joined JOURNEY in 2020 following the band's acrimonious split with drummer Steve Smith and bassist Ross Valory. Jackson — who previously played with JOURNEY during the mid-1980s — was forced to miss all the recent gigs because he was reportedly recovering from back surgery. Prior to JOURNEY's recent Las Vegas residency, Jackson had been replaced at the band's 2021 shows by Marco Mendoza, who had played several shows in 2019 with Castronovo and JOURNEY guitarist Neal Schon under the "Neal Schon's Journey Through Time" banner.

Explaining Walden's absence from JOURNEY's current tour, keyboardist/guitarist Jonathan Cain told Ultimate Classic Rock: "We were going to try the Narada thing — he did a terrific job on the [upcoming JOURNEY] album — but it didn't quite pan out. Deen's really added a lot, a great energy. He's in a really good place now, and it was just one of those things. When you start playing the old JOURNEY stuff, there's only a few cats on the planet who know the little nuances. We toyed with the idea of two drummers for a while, and we just decided Deen was the right way to go at this point. And, of course, his voice is fantastic. We're glad to have him back."

Deen was dismissed from JOURNEY in 2015 following years of alcohol and drug abuse that led to him being sentenced to four years' probation for a variety of charges involving his now-wife.

In March 2021, Castronovo revealed that he was on opiates for over a year while waiting to get his back surgery during the COVID-19 pandemic.

The 57-year-old musician, who had been sober for nearly five years after being fired from JOURNEY, shared his ordeal in an Instagram post. He wrote: "Opiates are evil and the withdrawals are murder."

JOURNEY has set "Freedom" as the title of its long-awaited new album, to be released later in the year. The LP will include the single "The Way We Used To Be", which came out last June. The song was the multi-platinum band's first new music since 2011's album "Eclipse", and the first track released by the band's revamped lineup. "The Way We Used To Be" marked Walden and Derlatka's first studio recordings with the band, and Jackson's first since 1986's "Raised On Radio". The song was produced by Walden at his Tarpan Studios, with co-production by Schon and Cain.