JOSH RAND Says STONE SOUR Had No Idea Band Was Being Recorded For 'Hello, You Bastards: Live In Reno' Album

STONE SOUR will release its first official live album, "Hello, You Bastards, Live In Reno" in December. In a recent interview with "The Metal Sucks Podcast", guitarist Josh Rand explained how the live album came about and why STONE SOUR decided to leave the recording of its October 5, 2018 performance in Reno, Nevada untouched.

"Actually, it all started out with the initial plan was for us to record on the Russian tour, and the equipment came in a couple of days early," he said (hear audio below). "Our TM [tour manager]/front-of-house guy ended up hooking it up, just wanted to test run it at the Reno show, didn't tell any of us and he recorded the show. The next day he's ,like, 'Hey, guys. I recorded last night's show. Check it out.' We're, like ,'Yeah…' We listened to it back and we were all pretty stoked with the performance of everything. We had no idea, so we didn't have that pressure of, 'We're recording' or anything. The way that it sounded is exactly like what you hear. We just decided we should put this out and not do anything to it — leave it exactly like it is, one-hundred percent raw and live with no overdubs or anything. We just tried to figure out things to do for our fans on the downtime while Corey [Taylor, vocals] is in SLIPKNOT. In the past, we did the cover records, this time around we decided to do the live record."

"Hello, You Bastards: Live In Reno" will be released on December 13 via Cooking Vinyl. The release features 16 of the band's most loved tracks, including "Absolute Zero", "Through Glass" and "Song #3". The album will be available on CD, digitally, and as a numbered 180-gram double vinyl package, limited to just 2500 copies, which also includes a poster, backstage pass, guitar pick, autographed setlist and a download card.

Earlier this year, STONE SOUR bassist Johny Chow confirmed to Meltdown of Detroit, Michigan's WRIF 101.1 FM radio station that the band has commenced the songwriting process for the follow-up to 2017's "Hydrograd" album.

Taylor told Australia's Heavy magazine in 2018 that he and his STONE SOUR bandmates started writing new music "pretty much as soon as we got on the road" in support of "Hydrograd". "We just can't be stopped; we're just gluttons for punishment at this point," he said. "But the cool thing is that knowing that we've got all this great material, we can kind of enjoy the rest as much as we can because we know that when it's time to really start kind of ramping up the demo machine, we're gonna have all this cool stuff to listen to. There's no pressure for us to just run right in."

Taylor, who stepped away from STONE SOUR in 2019 to focus on SLIPKNOT, said that the former band's absence from the touring circuit "will allow the audience to miss [STONE SOUR], which is the best thing in the world you can have — that built-in need for a band to come back. Just when you think you can't wait any longer, here comes this band and they're, like, 'Oh, goddamn, they're so good right now.' So we're pretty stoked, man. We're definitely looking forward to trying to see if we can top 'Hydrograd'."

"Hydrograd" was released as a deluxe edition in August 2018. The two-disc set, "Hydrograd Deluxe Edition", collects unreleased covers, b-sides, live recordings and alternate versions of songs from "Hydrograd". The deluxe edition is highlighted by "Burn One Turn One", a previously unreleased b-side from "Hydrograd". "Hydrograd Deluxe Edition" features 13 rare or unreleased songs including an acoustic version of the No. 1 rock song "Song #3", as well as covers of hits from RAGE AGAINST THE MACHINE, SOUNDGARDEN and VAN HALEN. 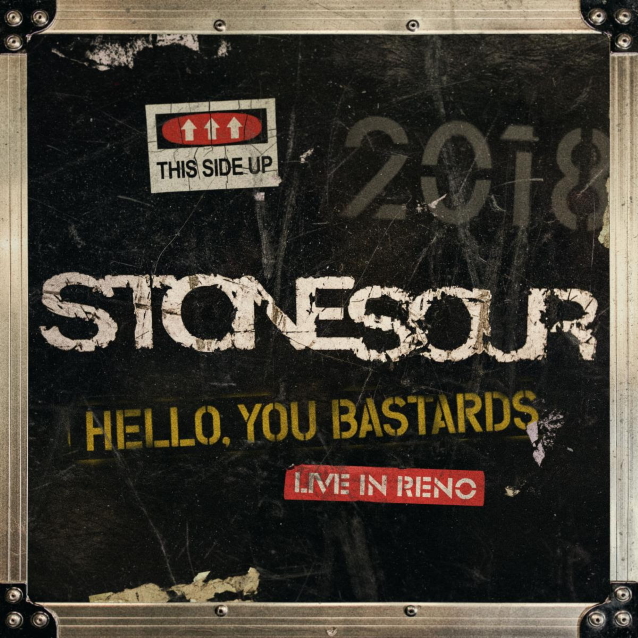