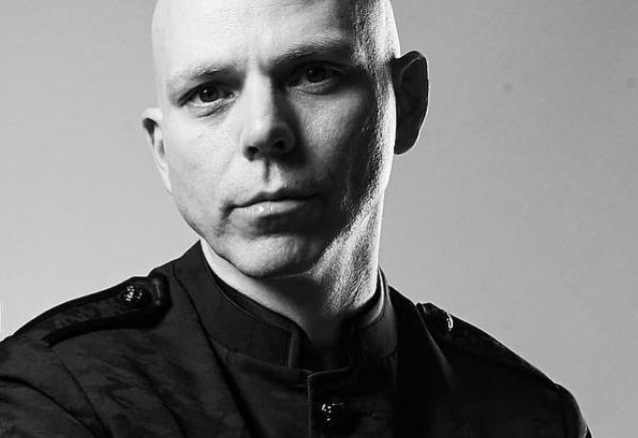 During an appearance on MACHINE HEAD frontman Robb Flynn's "No Fuckin' Regrets With Robb Flynn" podcast, STONE SOUR guitarist Josh Rand spoke about when fans can expect to see the follow-up to the band's 2017 album "Hydrograd". He said (as transcribed by BLABBERMOUTH.NET): "There's no timetable for a return, 'cause, honestly, between Corey [Taylor, vocals] doing his solo thing, now me working on THE L.I.F.E. PROJECT stuff, Roy [Mayorga, drums] working on MINISTRY… So, there's just no timetable.

"I made a comment last year, and it kind of backfired, because of how I said [STONE SOUR was on an] indefinite hiatus, which, if you know the definition, actually just means it's a long period of time with no timetable of return. I don't know if everybody thought I said 'infinite' instead of 'indefinite.' [Laughs] All of a sudden, the band was, like, over. It was, like, 'Oh my God! It's over.' All I was saying was there's no timetable. It's no different than what we've done in the past. It's just gonna be a longer break."

According to Rand, he and his STONE SOUR bandmates "needed to branch out", "try different shit" and "work with different people" before regrouping to work on new STONE SOUR music. "And then whenever that time is that we get back together, it'll actually be what is best for STONE SOUR," he explained. "There's no doubt about it in my mind. Just having these different experiences for all of us instead of just running that same cycle. I think more so with Corey and myself — like I said, he got to do a solo record where he's doing a different style of music than anybody would have thought of or that wouldn't have fit in STONE SOUR or SLIPKNOT. For myself, working with somebody that's not Corey and Roy. So there's a growth that will be there that we'll ultimately get which will benefit the band. I know some people might not be stoked that it's gonna be who knows when, but it needed to happen, and that's what's best for everybody involved."

Asked how he and the rest of STONE SOUR made the decision to take a longer-than-usual break this time around, Josh said: "I think at the end of the tour cycle, we had a good idea of what was going to happen, where [Corey] wanted to do the solo record. For myself, it's something I kicked around — just having some of the songs that I would musically write that I would never submit into STONE SOUR 'cause I don't feel like it fits at all. So I was kind of on that path to begin with. I just kind of got an extra nudge with him doing his solo record of, 'Hey, this is probably the time to do this.' And then we got hit with the pandemic, which then really locked me into the house. And I was, like, 'What else am I gonna do?' So I just started writing and working on playing piano. I did a bunch of stuff on piano, which some of it will come out, and some of it, it's, like, 'No.' I'll [it] for myself. And that's basically what we did. So we had a good idea, I think, that we were gonna take a longer break at the end of '19. I think towards the end, all of us were just burnt."

STONE SOUR has been off the road and out of sight since completing the touring cycle for "Hydrograd". Taylor has been working with SLIPKNOT since then, recording and touring behind that group's sixth effort, "We Are Not Your Kind", as well as making his solo album, "CMFT".

Last August, Taylor said that he was open to doing more recording and touring with STONE SOUR in the future. But he admitted that there had "been some contention here and there" between the members of the band in the past and added that it was "time" for him to "step away" and pursue his solo project for a while.

In June 2020, Corey told SiriusXM's "Trunk Nation With Eddie Trunk" that STONE SOUR is "kind of [on] the back burner. We all kind of felt that we did exactly what we wanted to do on [2017's] 'Hydrograd' [album] and we're just giving it a minute. I talked to the guys in the band about the solo thing and what I wanted to do, and they were all totally onboard with it. Everybody else has kind of got things going on, so they're all cool. So, yeah, I think STONE SOUR is kind of on hiatus right now, which is fine. If someday we wanna get back together and do some stuff, it'll be bigger than it was. But for right now, we're all kind of focused on kind of doing our own thing. But you never say never in this business."