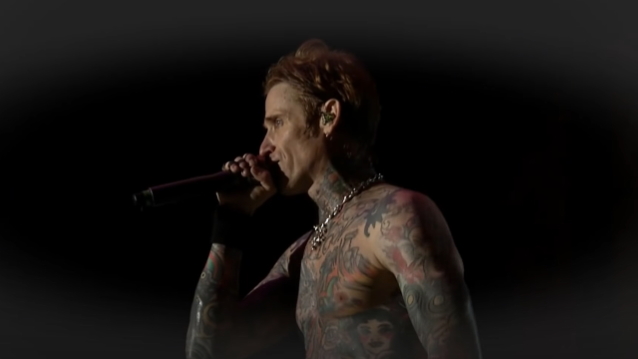 JOSH TODD Says There Are 'No Fillers' On BUCKCHERRY's Upcoming Album

Vocalist Josh Todd of California rockers BUCKCHERRY spoke to Australia's Silver Tiger Media about the band's upcoming album. The follow-up to last year's "Hellbound" was once again helmed by producer and songwriter-for-hire Marti Frederiksen, who has previously collaborated with AEROSMITH, DEF LEPPARD, Jonny Lang and Sheryl Crow, among many others.

"It's just a new body of work." Josh said. "It's where we're at today. The songs are really well written, and I think people are gonna really, really love it. There is no overall [lyrical] theme… You'll enjoy it."

Regarding BUCKCKERRY's songwriting approach this time around, Todd said: "The formula for us is to have no fillers — having a great record from beginning to end. That's what we want — we want to be able to have these unforgettable songs and melodies. And if they don't sound great, we just don't put 'em on records."

As for a possible album title, Josh said: "[There is] no title yet. We'll see. We've been throwing around some stuff but haven't agreed on anything yet."

Earlier in the month, Todd told Australia's Metal Mal that BUCKCHERRY's new LP "will be coming next year, sometime probably beginning of summer."

In August, BUCKCHERRY announced that Todd and guitarist Stevie Dacanay (a.k.a. Stevie D.) would head to Nashville in late September to finish the writing process for the band's tenth studio album. The band was scheduled to begin recording the effort on November 4.