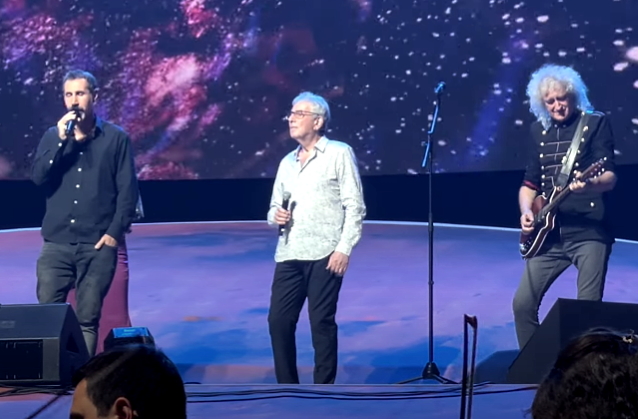 On September 7, QUEEN guitarist Brian May teamed up with SYSTEM OF A DOWN frontman Serj Tankian, SONS OF APOLLO vocalist Jeff Scott Soto, Graham Gouldman and opera singer Montserrat Martí to perform the QUEEN classic "The Show Must Go On" with the Armenian National Orchestra at the sixth edition of the Starmus festival in Yerevan, Armenia.

Speaking to Full Metal Jackie's nationally syndicated radio show about the experience of sharing the stage with Brian, Serj said (as transcribed by BLABBERMOUTH.NET): "[QUEEN is] an incredible band. They don't need me to say that, obviously; they're a huge band. And I've always respected the band and Brian's work.

"We have a mutual friend who is an astrophysicist, an Armenian astrophysicist, and this gentleman, Garik Israelian, along with Brian May, have created a festival, a science and music festival called Starmus. And that Starmus festival, they've done it in six or seven different countries around the world so far, one every year — except for the COVID years, I think. And this year was in Armenia, and they invited me to perform a few songs with the national orchestra, which was really amazing. And I also got to perform a song with Brian May. And he's a sweetheart — a really gentle but smart person, and extremely talented, needless to say. And it was just a pleasure meeting him and hanging out for a bit."

Every edition of the festival is organized around a particular theme related to space exploration, and this year's topic was "50 Years On Mars".

May, who is an astrophysicist and Starmus co-founder, had performed at virtually all previous editions of the festival.

"Starmus VI: 50 Years On Mars" was dedicated to the 50th anniversary of the first soft landing on Mars by "Mars 3" and the first orbiter "Mariner 9". "Mariner 9" took the first high-quality images of Mars while "Mars 3" brought the first rover, Prop-M, to the surface of Mars.

Stephen Hawking, one of the most influential scientists of the 20th and early 21st centuries, was a Starmus advisory board member and became the inspiration for an ambitious award in 2016 that recognizes the merit of popular science at an international level. The Stephen Hawking Science Medal awarding ceremony is one of the key events of the festival, aimed at promoting science to everyone. Previous winners of the medal have included Hans Zimmer, Neil deGrasse Tyson, Buzz Aldrin and Brian Eno.

Armenia was selected for its contribution to astronomy, astrophysics and space exploration. For much of the 20th century, it was home to the Soviet space program, and to this day it remains a key location for the international community, housing The Byurakan Astrophysical Observatory and the Aragatz Station.