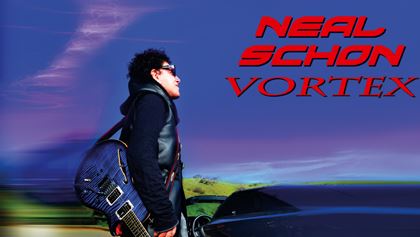 Mascot Label Group's Music Theories Recordings and Neal Schon have announced the release of "Vortex" on June 23. The 2-CD all-instrumental album utilizes rock as its foundation, while also embracing elements of jazz, classical and world music in an 18-track stunning, sonically explosive collection of original compositions. The release is dedicated to Schon's best friend and wife, who serves as his true inspiration every day (Both "Lady M" and "Triumph Of Love" were written for her, the latter of which he performed at their wedding on December 15, 2013.)

Says Schon: "This is an evolutionary album for me. I've always aspired to be a better player and push musical boundaries. And sure, I've sold 80 million records with JOURNEY, and I'm proud of that, but this album is really me — all based on my guitar, which is my 'voice.' It's bold. There's love, and there's definitely fire and an element of danger. And the energy level is off the hook."

That's evident from the first, mysterious-sounding measures of "Miles Beyond", the scalding tribute to jazz genius Miles Davis' pioneering fusion recordings that opens the album. The tune blends Schon's soaring leads, tectonic plates of grinding rhythm and brilliantly layered melodies within an arrangement that embraces Middle Eastern flourishes plus flashes of African drumming by Steve Smith. "Schon & Hammer Now" is a furious jam between the guitarist and his longtime friend and creative foil, Grammy-winning keyboardist Jan Hammer, whose many accomplishments include charter membership in the groundbreaking MAHAVISHNU ORCHESTRA. And the two match their brilliant technique and relentless invention throughout, sparring with the grace and speed of a young Mohammad Ali. Schon reveals, "Jan is all over this album. I wrote the material to give Jan room to stretch. There are not many three-minute ditties. It's all huge, epic, bombastic…futuristic." After hearing the completed album for the first time, Hammer made a succinct observation, "This is fucking amazing."

"Airliner NS910" is further proof. It's all speed and swagger, with Schon skywriting the song's sweetly singing theme in the indelible vapor trail of the instantly recognizable operatic tones of his signature model Paul Reed Smith guitars. He reflects, "Since 'Vortex' is a two-record set, it's both my ninth and tenth solo albums. That's where the 'NS910' comes from."

The music of "Vortex" originated in the hard drives that Schon is constantly filling with ideas for riffs, melodies and chord progressions at home. But they came to life at Berkeley's Fantasy Studios, his preferred spot for recording since JOURNEY cut the 10-times-platinum number-one album "Escape" there in 1981. Schon states, "It's my home away from home. I spend so much time there that they've given me my own locker."

Schon produced and played bass on "Vortex", too, and was joined in the studio by Smith and keyboardist Igor Len. Hammer and Len also appeared on Schon's seventh solo album, "The Calling", which was followed by the blues-inspired hard rock album "So U". He offers, "Igor and Jan complement each other, and me, beautifully." And "Vortex"'s "Eternal Love" is a testament to Len's creativity. The song, a richly emotional ballad, features Len alone on piano. The guitarist observes, "He sat down and played the tune spontaneously, and it was so gorgeous and deep that I had to have it on my album." Schon offers his own reflective solo performance on "Vortex" with the sparsely arranged acoustic guitar meditation "Mom", dedicated to his mother, Barbara Schon. He reveals, "Like most of the performances on this album, it wasn't premeditated. I'd just pick up a guitar and tell my engineer Jesse Nichols to hit Pro Tools."

The intensely creative guitar giant has always had a seemingly innate ability to make glorious music. He began playing at age five and was inspired by soul vocalists like Aretha Franklin and Gladys Knight, and blues and jazz guitarists ranging from B.B. King, Albert King and Eric Clapton to Wes Montgomery. When Schon was just 15 years old, Carlos Santana invited him to join his band. Schon's recording debut was on the classic 1971 album "Santana III". He played the solo on the LP's hit single "Everybody's Everything". Recently Schon has been working with Carlos Santana on a new album, co-writing songs and playing key performances including homecoming SANTANA concerts in Guadalajara and Mexico City that included JOURNEY as the opening band.

Schon formed JOURNEY in 1973 and has led the band through its astonishing 42-year history. Along the way, JOURNEY has sold well over 80 million albums, amongst which the band's "Greatest Hits" release was certified Diamond by the RIAA for sales in excess of 10 million copies. To date sales now exceed 15 million copies. Eight other JOURNEY album releases have been certified multi-platinum. Neal Schon co-wrote the timeless hit "Don't Stop Believin'", which now holds the title as the most digitally downloaded song in history. Seventeen additional JOURNEY singles were Top 40 hits. Schon has received multiple Grammy Award nominations for both his work with JOURNEY and his solo recordings, and JOURNEY has been nominated for the Rock And Roll Hall Of Fame.

Besides solo albums and tours and his historic work with JOURNEY, Schon has an extensive history of blue-ribbon collaborations. These include co-founding the supergroup BAD ENGLISH and forming bands with vocalists Paul Rodgers and Sammy Hagar. He released two collaboration albums with Jan Hammer, "Untold Passion" and "Here To Stay", while also performing on releases from Michael Bolton, RETURN TO FOREVER's Lenny White and many others.

One thing he's never done is considered resting on his laurels. Schon reflects, "I feel more aware and alive now than I've ever been. Part of that is the sobriety I've had for the last seven years. I've also evolved as a person and a player though understanding the value of being in the moment — letting things happen and not thinking too much. There's an old blues saying: 'If you're thinkin', you're stinkin'. When you stop thinking and just play from the heart, you discover your own voice. That's the real thing, and that's what 'Vortex' is about for me." 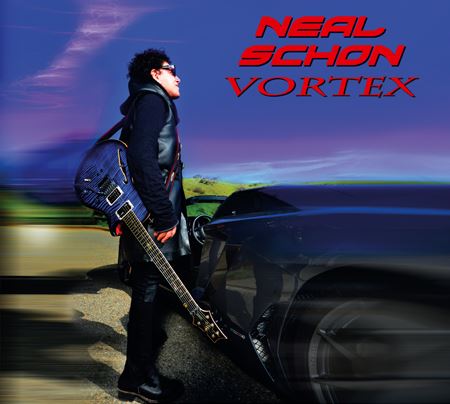