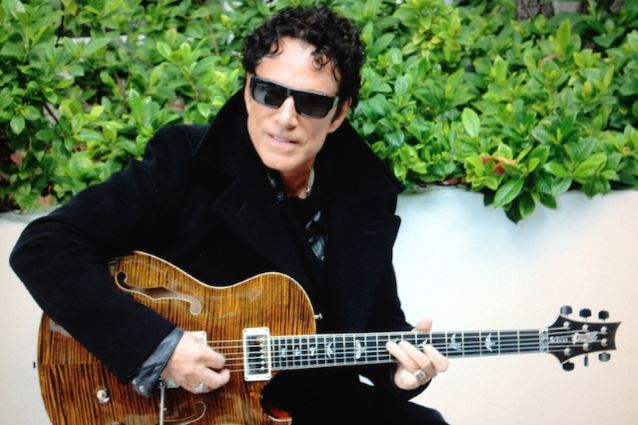 JOURNEY's NEAL SCHON: 'The Sum Of The Whole Band Is Way Greater Than Any One Person'

Last week, Shawn SixX of Boston's WZLX radio station conducted an interview with JOURNEY guitarist Neal Schon. You can now listen to the chat using the widget below. A couple of excerps follow (transcribed by BLABBERMOUTH.NET).

On how current JOURNEY singer Arnel Pineda feels about the band being inducted into the Rock And Roll Hall Of Fame next year without him:

Neal: "He's got a really great attitude — much greater than probably anybody could even imagine. He's such a humble and normal person that he doesn't have that type of ego to where he's going, 'Hey, wait a minute. This has been me for the last nine years, and I've been here longer than any singer ever in JOURNEY doing this night to night.' He's worked his ass off. He sings his ass off, he's worked his ass off; it's a lot of work. And, really, Mr. [Steve] Perry [former JOURNEY singer], he set the standard very high for himself. I mean, it's not like it's a simple blues song and you can sing it way down here. Everything is way up there and you've gotta really take care of yourself as a singer to be able to even pull it off. So Arnel knows how we feel about him. And what I'm saying is [Arnel] will be there, and I am hoping that he will have a part in it too. I've not been told what songs they want us to play. I heard that you can't just pick what you want. You can suggest things, and then the producer's gonna decide. So it's one of those things. I feel it's gonna be a great opportunity to… I would like Steve to meet him, and I think it would be really cool if he just gave him some kudos and said, 'Thank you, man. You've been carrying this torch, and everybody's benefitting from it, and keeping the catalog alive.' 'Cause the bands just go away… No matter how great the records are, if you just go away and you don't play every year and get in front of your fans, you fade, and I believe that the music fades too. So there's a lot of reasons why we keep gaining momentum. It's 'cause we are working it, man — we are out there every year."

On whether Arnel would be willing to step aside and let Steve sing for JOURNEY at the Rock And Roll Hall Of Fame induction:

Neal: "Arnel would gladly step aside. He's said it a million times, and he means it. It's always been an open door for Steve to walk on anytime he wanted. And, for one, I really don't understand… There's always people talking drama, like it was my fault that Steve's not there, or, 'Why did you do it without him? You should have waited forever until he had his operation.' But you know what? At this point in our careers, we had done another record with Steve, 'Trial By Fire' [1996], after a very long hiatus — probably ten years; I can't remember exactly. And then he came out from nowhere, called up Jonathan and said, 'I wanna do a record.' And I'm, like, 'What?' He told me, and I was, like, 'What? At this time?' And I was kind of thinking, 'Why? Why, at this point, does he wanna do another record?' And so, we did it, though. We got together, and it was really painless. Much like it's always been when we get together, we sit down at a piano or with a guitar, and we arrange and write on the spot, and it just comes. There's chemistry in between people, and I always had great chemistry with Steve since he came in the band. The first song we ever did was 'Patiently', and I had the music sitting there, all the chords and all the progressions for the song. I was playing it on an acoustic guitar, as it is on the record, and he just started singing on it, and he was writing lyrics as he was going, and before you knew it, bam, there was the first song. And that's really the first song I had really written with any vocalist. The other songs we did with Gregg [Rolie] before that, they really started out as jam songs, and then he fit his way into it. So then I was learning a different form of writing that I didn't know if I could do it or not. So once we found out that we could do it, we just kept coming with it."

On JOURNEY being all about music and not about ego:

Neal: "That's right. You're exactly right. It is all about the music. And that's why we're still here. We wrote great music. The music that you write, when it stands the test of time, and it ends up being timeless music, which I think it is for classic rock; otherwise it'd be gone by now, and I never imagined that our music would have still been here, but it is. And when you do that, and you realize that, the sum of the whole band is way greater than any one person. It's about songs, you know. And if everyone wasn't there from the get-go, if Steve wasn't there, we wouldn't have these songs. So tons of kudos to him, man. I know how good Steve Perry is, and was. He's one of the greatest singers I've ever worked with — period — and I've worked with some really great singers: Paul Rodgers, Sammy Hagar, John Waite, and the list goes on. And Arnel is right up there, man."

In addition to Schon and Perry, original JOURNEY members Ross Valory, Gregg Rolie and Aynsley Dunbar will be inducted, as well as current drummer Steve Smith, who's on his third run with the group, and longtime keyboardist Jonathan Cain.

The 32nd annual Rock And Roll Hall Of Fame induction ceremony will be held on April 7 at the Barclays Center in Brooklyn, where it will be held for the third time. An edited version will later air on HBO and there will be a radio broadcast on SiriusXM. Ticket details will be announced in January.

Artists are eligible for the Rock And Roll Hall Of Fame 25 years after the release of their first album or single.