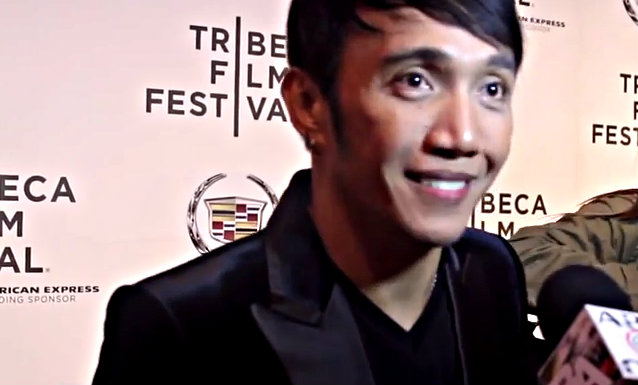 JOURNEY vocalist Arnel Pineda has shot down reports that he has asked to leave the band in 2015 in order to spend more time with his family.

Said Pineda in a statement: "I am as happy to be in JOURNEY today as I was when I first joined the group.

"Next to my family in Manila, JOURNEY is my family.

"When I'm not working, I spend time at home with my wife and kids, and my Foundation.

"Now I am busy preparing for our tour with STEVE MILLER BAND and TOWER OF POWER.

"I wish whoever is making up these lies would put their time to good use and stop spreading these false stories."

Pineda was responding to a new story published on (and since removed from) the Classic Rock magazine web site, which quoted MelodicRock.com founder Andrew McNeice as saying Pineda's days with the group could be numbered. "The JOURNEY tours are being scattered and are fewer due to a request from Arnel," reads the quote. "He told the group it has gotten to be too much pressure leaving family at home and singing almost every night. He's asked to leave in 2015."

The Classic Rock magazine report added: "They got him a bus for him and his family, but his wife says it’s too hard to travel with two babies, and their boy has school. Arnel stated that he does not want to record a new album with JOURNEY because that would just mean more work. He is very stressed right now and angry with [JOURNEY guitarist] Neal [Schon]."

Schon has since dismissed those reports as completely false, telling MelodicRock.com, "Rumors couldn't be further from the truth.

"Arnel and I are solid… VERY SOLID.

"We are very much looking forward to getting out there this year and kicking some ass.

"We will be in rehearsal for three weeks prior to the tour and we will be revamping things to keep it fresh. I'm also heading to rehearsal with the original SANTANA band for a record to be recorded later this year titled 'Santana 4'.

The Pulse Of Radio asked JOURNEY keyboardist Jonathan Cain if the band ever thought of simply asking Steve Perry to rejoin them, rather than always searching for the perfect sound-alike vocalist. "No, because he really sealed the deal back in '98 and said, 'Don't expect anything from me, y'know, we're done. You and I are done,'" he said. "So I know that he keeps his word and I would not make that call because I know that he's quite happy with the life he has. And it's pretty rigorous out here. What we do is very rigorous, and he doesn't need it. Why does he need it, y'know? His legacy is already there."

JOURNEY kicks off its 39-date spring and summer tour with the STEVE MILLER BAND and TOWER OF POWER on May 15 at Chula Vista, California's Sleep Train Amphitheater.