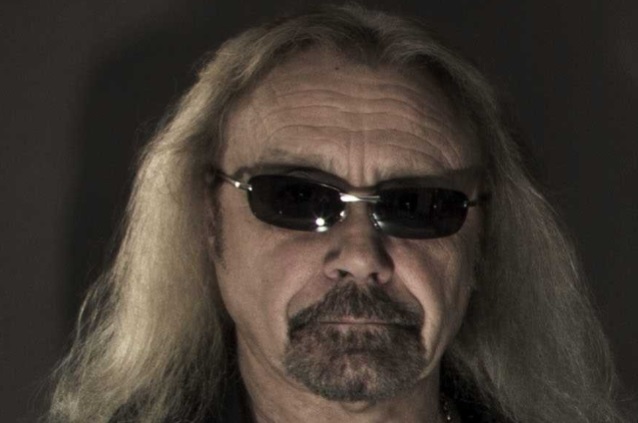 On the recent passing of Chris Tsangarides, who produced the band's albums "Painkiller" and "Jugulator":

Ian: "The first time we worked with Chris, he was [an] engineer at Morgan Studios in London. He worked on our second album in 1975 — 'Sad Wings [Of Destiny]'. Of course, he was a fresh-faced young lad back then. He was full of life, and he was a funny man as well. He'd put on some accent and just sit down in the middle of the studio and say 'produce, produce' and stuff like that. Brilliant bloke, brilliant bloke. Obviously, he worked up in his own field and he ended up being a producer. He worked on 'Painkiller' with us, which was a big move for us because we'd been using Tom Allom up until then. At that point, I think we'd sort of reached the end of the road with Tom, so we thought we'd use someone else. Chris had been doing a lot of new metal, so we thought we'd give him a go and see how he'd fit in after all these years. There's quite a gap there, some fifteen years or so, and he was just the same — a bit older, a bit bigger, but he was just the same. He did a tremendous job. 'Painkiller' is one of our landmark albums. And then after that, when we took on Ripper [Owens], he did 'Jugulator' as well, and [we] had a great time there down at Silvermere Studios.

"It's a sad loss. He was so full of life. We hadn't seen him for a long, long time — in this business, you're in different places at different times — but it is sad, and it is a great loss to metal in particular and music in general."

On the group's new album, "Firepower":

"We went back to using producers on this album for the first time in a couple of albums. Tom Allom, who we've known from all these years ago, it's a name that crops up every time we think about using a producer again. And Andy Sneap, who's been doing all the new metal. He's where Chris Tsangarides was all those years ago. He's well up with the new recording techniques. So, we decided to approach them both to see if they'd work together, and fortunately for us they did — they got on like a house [on] fire."

On tracking the album together as a band rather than recording each member's parts separately:

Ian: "Funnily enough, you'd have thought Tom would've come up with that. but it wasn't — it was Andy. He said, 'It would be great if you could play together.' He wanted us to play as a band. When we started out, we were all a bit wary about doing it like that. The trouble is when you're doing it like that, you get your part right and somebody else hasn't done it properly, so you have to do it again, so you're there for ages — or you used to be at one time. But these days, you can always go back and do it again yourself. And we loved it. We played as a three- or a four-piece with a backing vocal and walked into the control room to see what we'd done, and we just sounded so real and fresh and awesome. You weren't playing to click tracks; you were playing to something that's already there. You were pulling it down together, the little lifts and drops in tempo, and everybody's doing it together, and it just sounded so real. We did the entire album like."

On what fans can expect from the album:

Ian: "Something that we've been known for over the years is our versatility, and there's something there for everyone. There's very, very heavy stuff — one of the heaviest songs we've ever done, 'Lone Wolf', and there's production pieces — there's 'Rising From Ruins', there's 'Traitors Gate' and then there's the softer songs as well. It really is a complete album, and we're all completely over the moon with it."

On JUDAS PRIEST not being voted into the Rock And Roll Hall Of Fame:

Ian: "[I'm] not surprised. It's one of those things — I don't think they like metal. You take BLACK SABBATH, one of the few metal bands who are in there, and it took eight nominations to get them inaugurated. If it takes us eight nominations, we probably won't be around at the time anyway. These things are great — when it happens, it's very flattering that you're being recognized by your peers, but it's not the end of the world when it doesn't happen."

On the impact of guitarist Richie Faulkner, who joined the band in 2011:

Ian: "K.K. [Downing] has been an immense part of the band since day one, so when he left, it was a big hit. But the band is bigger than the sum total of its parts, and we needed to carry on. The rest of us had no intention of knocking it on the head. And along comes Richie. What a great find he's been. He's been an inspiration since he joined. He's brought new life back to the band, come up with fresh ideas that we probably wouldn't have thought of ourselves, and he's been a real asset."

On whether "Firepower" will be the band's final album:

Ian: "Well, we're not planning on this one being the last, put it like that. We were never going to stop touring; we were just going try and get away from intensive touring. None of us are spring chickens anymore. But that didn't happen. [Laughs] If you're going do a tour, you have to do a tour — you can't say, 'We'll play here and not there.' But we are loving it. That's one of the reasons we do this – it's because we love it, and there's no looking back now. We'll just go until one of us drops, I suppose."

"Firepower" will be released on March 9 via Epic. The cover artwork for the disc was created by the Chilean/Italian digital artist and photographer Claudio Bergamin.