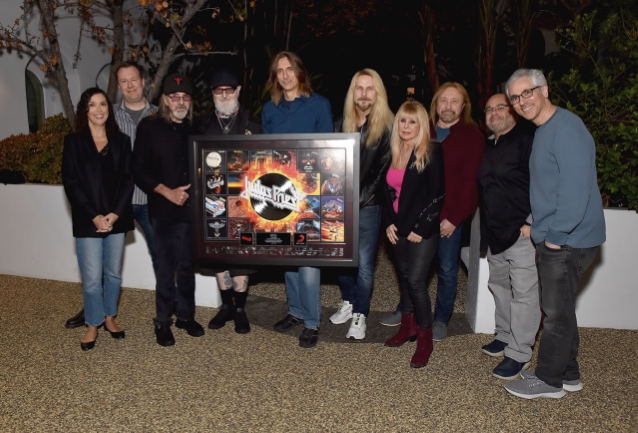 British heavy metal legends JUDAS PRIEST have been presented with a special plaque commemorating an incredible 50 years in music and over 50 million album sales worldwide. The presentation was made on the eve of the band's induction in to the Rock And Roll Hall Of Fame in Los Angeles last month.

There are few heavy metal bands that have managed to scale the heights that JUDAS PRIEST have during their 50-year career. Their presence and influence remains at an all-time high as evidenced by 2018's "Firepower" being the highest-charting album of their career, a 2010 Grammy Award win for "Best Metal Performance", plus being a 2006 VH1 Rock Honors recipient. JUDAS PRIEST originally formed in 1969 in Birmingham, England (an area that many feel birthed heavy metal). Rob Halford, Glenn Tipton, K.K. Downing and Ian Hill would be the nucleus of musicians (along with several different drummers over the years) that would go on to change the face of heavy metal. The current lineup, which changed in 2011, consists of Halford, Tipton, Hill, Richie Faulkner and Scott Travis.

PRIEST was inducted into the Rock Hall by fellow rock legend Cooper, who described them as "the definitive metal band." He added: "They defined the sound we know of heavy metal and their sound is unmistakable. And what can you say about Rob Halford's voice? Never have screams covered such a range. Is there any emotion that he can't express?

Tipton was diagnosed with Parkinson's disease eight years ago — after being stricken by the condition at least half a decade earlier — but announced in early 2018 he was going to sit out touring activities in support of PRIEST's latest album, "Firepower". He was replaced by "Firepower" producer Andy Sneap, who is also known for his work in NWOBHM revivalists HELL and cult thrash outfit SABBAT.