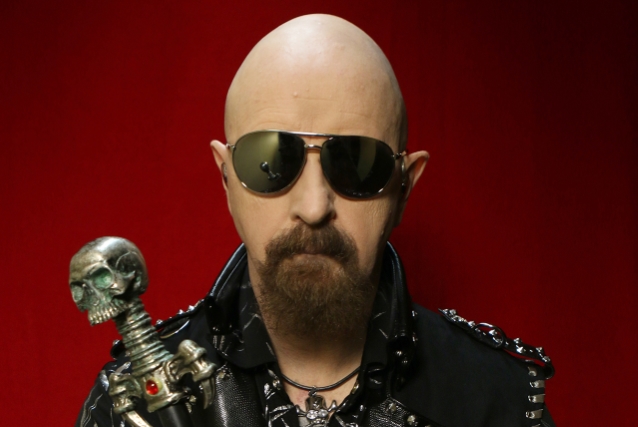 Rob Halford has revealed that JUDAS PRIEST is planning to mark the band's 50th anniversary in 2019 with a special celebration. "We are, yes," he told Sara Parker of Philadelphia's 93.3 WMMR radio station in a new interview (hear audio below). "We're already having these discussions every now and again in the band and with our label and with our promoters and management. We have some ideas and when we get close to solidifying something, we'll let you guys know."

He added: "It's gonna be a great year. What a celebration. Another incredible milestone for JUDAS PRIEST that we're looking forward to sharing with everybody."

Bassist Ian Hill is the sole remaining original member of JUDAS PRIEST, which formed in 1969. Halford joined the group in 1973 and guitarist Glenn Tipton signed on in 1974. Rob left PRIEST in the early 1990s to form his own band, then returned to PRIEST in 2003. Founding guitarist K.K. Downing parted ways with the band in 2011, and was replaced by Richie Faulkner.

A month before the start of PRIEST's "Firepower" tour, Tipton bowed out due to the worsening of his Parkinson's disease, first diagnosed four years ago (after being stricken by the degenerative condition at least half a decade earlier). His spot in the band is being filled by "Firepower" album producer Andy Sneap.

Hill, who turned 67 in January, told The Pantagraph: "You roll with the punches, and we've had many over the years. You don't think about those things or ask yourself, 'Why the hell I'm still doing this after 60 years?' You keep doing it for the love of it, and I can say that we all still love doing this for our living. The people I know who've retired ... the next thing you know, they're going downhill quickly. This keeps you young and gives you something aim for. Touch wood, I'm doing well at the moment, and will continue along those lines."