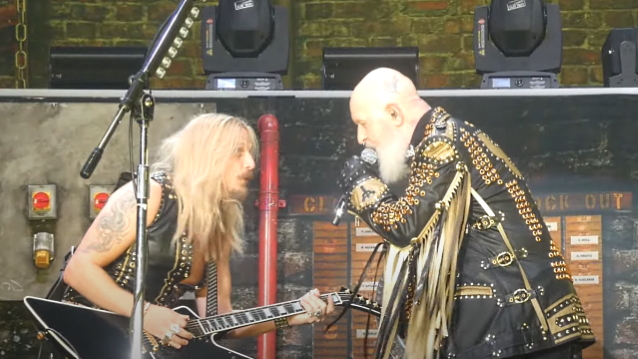 As was the case with their appearance at the Bloodstock Open Air festival in August, the British heavy metal legends, who are celebrating their 50th anniversary, threw in several rarely played songs in their set, including "One Shot At Glory" and "Invader", as well as several tracks that hadn't been played in a long time, such as "Rocka Rolla, "Exciter", "Hell Patrol", "A Touch Of Evil" and "Blood Red Skies".

In a recent interview with Kirby Ray of the Cape Girardeau, Missouri radio station Real Rock 99.3, JUDAS PRIEST drummer Scott Travis spoke about what fans can expect from the band's current North American trek, which will conclude on November 5 in Hamilton, Ontario, Canada.

"We have a whole new set designed and the production — meaning the lights and the video screens behind the band, the actual stage set," Scott said. "We have some props we've never used before that are gonna make appearances throughout the show. And so all of that is new, as you have to do with every tour — you have to just come up with all new stuff. It's almost like a wardrobe; you can't wear the same thing twice. So, that's all new. And because JUDAS PRIEST have a 50-year catalog, it's a blessing and it's a curse in the sense that you've got a 50-year catalog, if you will, to choose from, but at the same time you can't do everything. So we are gonna pull out some new old songs — songs that JUDAS PRIEST recorded way back when and either never had played live or if they did play it live, it was literally 40, 45 years ago. So we're doing some of that again. And then playing some newer new songs, if that makes sense. In other words, something off maybe 'Painkiller' we haven't done in a while or 'Firepower' that we haven't done. And an amalgamation of that, along with some classics, and you've got a new JUDAS PRIEST set."

JUDAS PRIEST singer Rob Halford told Ultimate Classic Rock, about his expectations for the tour: "Here's the thing: We've got to get out there and do it, man. If we don't, we're going to be sitting home for the rest of this year, next year, the year after that and the year after that. This stuff isn't going to go away. We've got to find a way of getting through it. You talk about herd immunity, you talk about all of these different things, you can only do as much as you can do. You've got your bubble, you've got your masks, you've got the sanitizer. And even that can't kill this evil demon of a virus. It hits you when your friends, like Gene [Simmons] and Paul [Stanley], get it. And Sebastian Bach and Bruce Dickinson, and all of my other friends.

"Thankfully, they haven't been devastated by the horrible thing like so many people have," he continued. "But we've got to do it. I think if the scientists had said, 'Look, everybody hang on, if we give it another year or two, we think we've got the vaccine that's going to kick its ass,' but they haven't, have they? They've just said that there's a booster shot coming. I'll be first in line for that. And then it's like a lottery, because, again, I was talking to some friends the other day with certain bands that I won't name. But they've been out for a while and everybody's fine. Crew is fine, the band is fine. They're doing the bubble thing, they're doing the protocol thing. It's like a lottery, this virus is, the way it can suddenly come out of nowhere. I know that Gene and Paul, their whole KISS [organization] was doing as best as they could. And yet it creeped in. It's a horrible, horrible thing.

"So, we have to battle on. We really have to battle on. I think that's all we can do. And if ever we needed music, if ever we needed to be with each other, now is the time that we need to do that. And talking about the fans, we have our protocols in place for the fans, as well, with [concert promoter] Live Nation, who are making the bulk of this tour. We have a great relationship with Live Nation, and we're working together to make sure that we can make it about as safe as we possibly can. Because at the end of the day, you've got something or you've got nothing and nobody wants nothing, right? So let's just do our best and keep our fingers crossed, and please, God, don't let any of us be hit by this horrible thing." 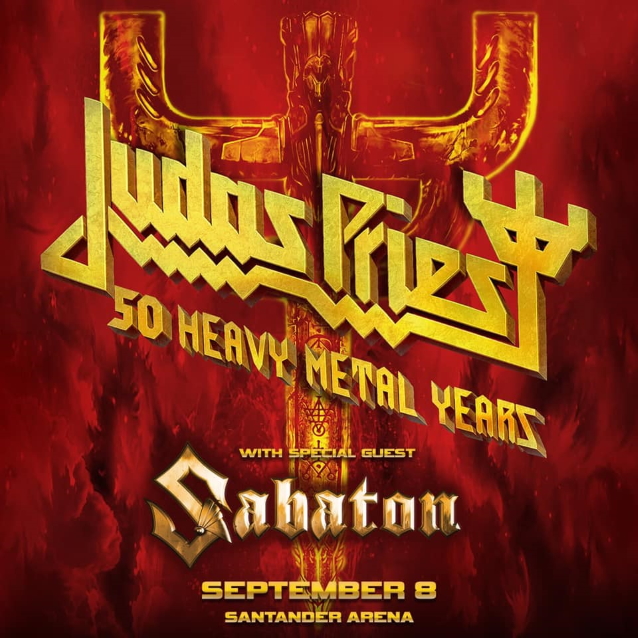