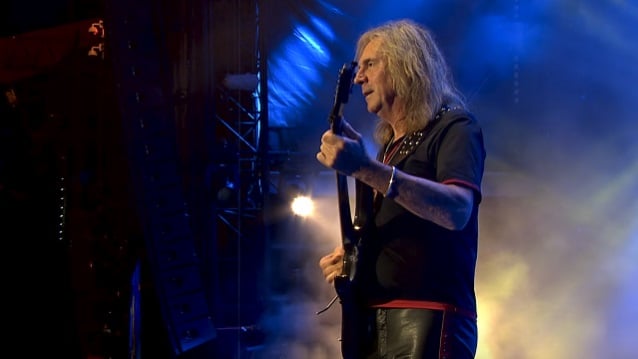 An exclusive JUDAS PRIEST pop-up store was launched this past Friday, March 9 in the gallery at Sony Square NYC (25 Madison Avenue) in New York City. Featured items include a gallery of rare band photos, a display of historic JUDAS PRIEST stage outfits, JUDAS PRIEST lyric sheets handwritten by Rob Halford, and other JUDAS PRIEST surprises. For sale at the pop-up store is PRIEST's new album, "Firepower", as well as the band's entire vinyl catalog and authentic JUDAS PRIEST merchandise.

A video tour of the pop-up store is can be found below (courtesy of PiercingMetal's Ken Pierce). Also available are photos of the items featured in the store.

"Firepower" was released on March 9 via Epic. The follow-up to 2014's "Redeemer Of Souls" was recorded by British producer Andy Sneap, the band's longtime collaborator Tom Allom and engineer Mike Exeter (BLACK SABBATH). The cover artwork for "Firepower" was created by the Chilean/Italian digital artist and photographer Claudio Bergamin.

Judas Priest Pop-Up: Pick up a copy of their new release "Firepower" at #SonySquareNYC and reserve your spot to meet them in person on March 19.