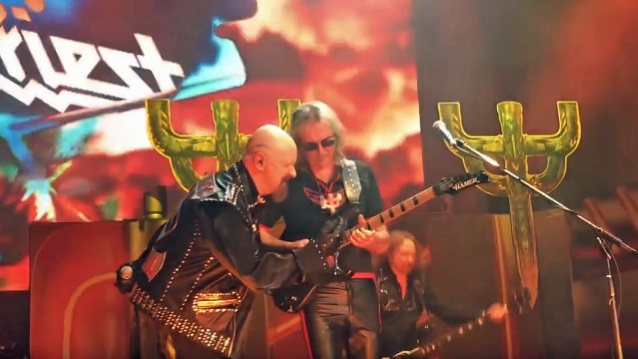 Guitarist Glenn Tipton rejoined his JUDAS PRIEST bandmates on stage Tuesday night (March 20) at the Prudential Center in Newark, New Jersey to perform the concert's three-song encore: "Metal Gods", "Breaking The Law" and "Living After Midnight". Fan-filmed video footage of his appearance can be seen below. Also available are photos of the show.

Rumors that Tipton would perform with JUDAS PRIEST at the Newark gig gained strength Monday (March 19) after he took part in a signing session with his bandmates at the Sony Square NYC in New York City.

Tipton recently thanked JUDAS PRIEST fans for their messages of support in the five weeks since he announced that he was retiring from the road due to his battle with Parkinson's disease. Although Tipton played on the band's new "Firepower" album, he is being replaced on tour by the LP's producer, Andy Sneap.

Tipton said: "Four years ago, I was diagnosed with Parkinson's and was told by my specialist that I had already had it for over 10 years. I knew something was wrong with my co-ordination and fluency regarding my playing, but I worked around it and battled on. I have good days and bad days, but the disease is degenerative and I would never want to compromise the greatest metal band in the world."

Tipton added: "It was therefore during the last rehearsals I decided to step down and have Andy Sneap fill in. He's a great guy and I'm sure he'll do a great job. I'm sure the band will be as strong than ever."

He continued: "I have been overwhelmed by the massive support and love I've had from other artists and from fans all over the world and from many friends and metal maniacs out there. It's not the end for me — I'll still be able to write and record and on good days even join the band on stage for a few songs."

Tipton thanked his bandmates for their support and insisted that he will continue to be a member of JUDAS PRIEST.

JUDAS PRIEST bassist Ian Hill told CBS SF that the subject of Tipton not playing on the "Firepower" tour didn't come up until after the recording sessions for the album were already completed. "That's the whole point," he said. "It's a terrible condition. Glenn's great for about ten minutes. He'll stand up there and he'll play through a song. Which is great from an album point of view. He rarely has to play longer than that if he does a song from start to finish. The longest song on the album is only seven minutes. That sort of thing he can handle, and, of course, [in the studio] he's sitting down on a stool. But if you put him on a stage and he to stand up there for the better part of two hours, that wasn't really realistic. We were hoping it was going to happen. We went through a similar scenario the last tour. We all knew then he was having his problems. So we started rehearsals and he was rough, no doubt about it. But as we went on through the week, he got better every day. And by the end of the rehearsals, he was ready to go. And he put in awesome performances on the last tour. So we were expecting — or at least hoping — that would happen again. But into the second week of rehearsals, it was quite obvious to everybody it wasn't going to happen this time around. It was… an achingly painful thing to him to do; to admit to us and the rest of the world — and to himself mainly — that his body wasn't going to let him do what he loved to do above all else anymore, you know? I mean, we were all upset when he came out and said it. The hairs on the back of my neck are sticking up now just talking about it! It's a cataclysmic thing to happen to someone. And Andy just happened to be in the recording studio. He brought some effect tapes down that he'd put together for us for the new album. And just said, 'You know, maybe Andy would be able to do it.' So he asked him, and after he picked is jaw up off the floor [laughs], he agreed to give it a go."

Nothing could have made me happier than to see this! Welcome back Glenn! Amazing set from Judas Priest.

Judas Priest Signing at Sony Square Store in NYC 3/19/18 - Great to see Glenn Tipton hanging with the band! Thanks for taking the time to meet all of us! Amazing CD congrats @judaspriest@RichieFaulkner@mr_scotttravis#RobHalford#GlennTiptonpic.twitter.com/1xMHhJ8AbL

Glenn Tipton has joined his Priest bandmates in NYC... pic.twitter.com/xIoITYmHt3