JUDAS PRIEST has released a statement after the band's European tour with Ozzy Osbourne was postponed for a second time.

Ozzy initially scrapped his entire 2019 schedule earlier this year, as he recovered from surgery to repair an injury sustained while dealing with his recent bout of pneumonia. The European leg of his "No More Tours 2" trek — with JUDAS PRIEST as the support act — was then rescheduled for January through March 2020, with the North American dates set to follow in May 2020.

Ozzy posted a video on his social media accounts on Wednesday (October 9) in which he announced the postponement of the 2020 European tour and addressed his health status.

He said in part: "I can't wait to get off my ass and get going again. But you're just gonna have to be a little bit more patient. I'm postponing the European tour because I'm not ready… When I do come back on an American tour, I wanna be one hundred percent ready to come out and knock your fucking socks off."

In response to the second tour postponement, JUDAS PRIEST issued a brief statement in which it thanked fans for their support while wishing Ozzy a full recovery.

The British heavy metal legends wrote: "We are very grateful for the rock solid support from our wonderful UK & European fans as Ozzy gets well and strong - the UK/European tour will showcase the very best British Metal from the ones that started it all and we proudly look forward to celebrating our 50 Heavy Metal Years together with you!"

According to Live Nation Sweden, the new European tour dates will now take place "in the first half of 2021." The American dates remain in place for now. 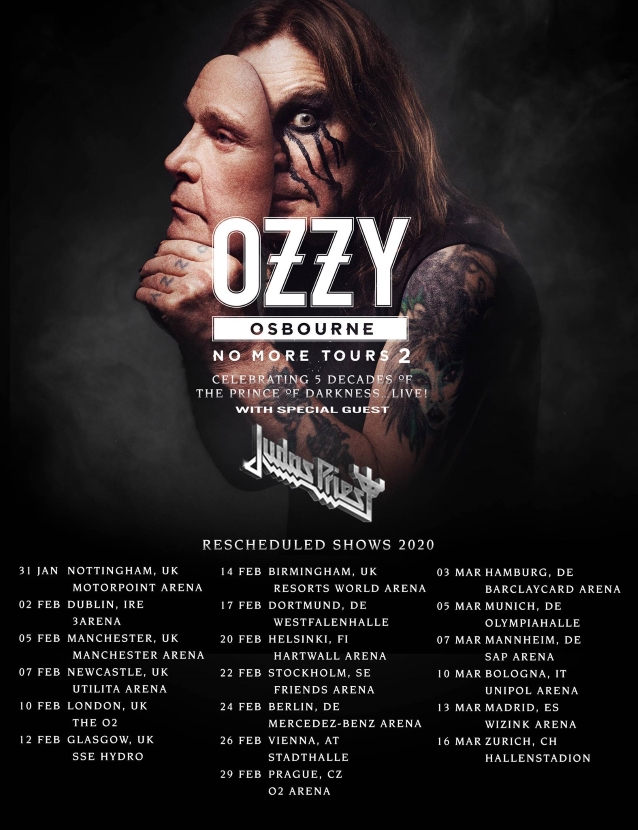