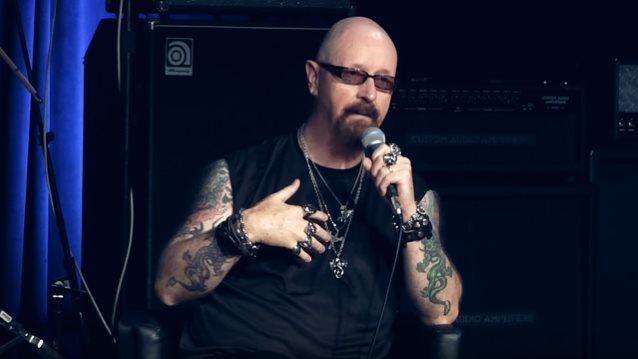 JUDAS PRIEST's ROB HALFORD: 'There Is Some F**king Incredible Things Coming From This Band'

On his performance with the the Japanese teenage girl pop metal band BABYMETAL at last year's Alternative Press Music Awards in Columbus, Ohio:

Rob: "It was pretty cool. A lot of people hated me after that, which is… whatever. Whatever. My philosophy in life is 'do everything that you wanna do and don't let nobody try and stop you.' Because if you're living your life for yourself… That can be kind of dangerous territory in the music world, because our fans, who I love with all my heart, are like family. And when you're in a family, you're very opinionated. 'What is he wearing?' You know, that kind of thing. 'What is he doing with BABYMETAL?' I just wanted to do it because they asked me, and I think they're pretty cool, and that was that. So end of story. And then you go to Blabbermouth, there's, like, five thousand, 'Fuck you! Fuck you! Fuck you!'"

On the JUDAS PRIEST creative process:

Rob: "I still enjoy the adventure, the challenge of a new vocal idea, an approach. PRIEST is making new music right now. I never talk about PRIEST music before it's officially time to talk about it, but there is some fucking incredible things coming from this band — some really, really serious stuff is about to happen. I think everybody's gonna be very, very happy with what we're trying to do next. And that again is always what else can you do? After forty-something years, you can still do something different. And that's what I love about this band, about PRIEST — that we haven't kind of let go of the reins. We're still very much hungry and searching and trying to prove what we've got left inside of us as musicians. And so this next batch is gonna be a real thrilling moment for everybody, I think."

On JUDAS PRIEST's 2011 announcement that it was embarking on the "Epitaph" world tour, which was intended to be a "farewell" run for the band:

Rob: "You never lose sight of the fact of where you are and how you got to the place that you're at, and I think that's not just in music, but in everything. There's very few of us that can get through life without having some kind of a team or a person or a bunch of people helping us move ahead and achieve the things that we love. And so it is with us in PRIEST. There's a tremendous love that we have for each other as far as, you know, musicians. And the fact that this thing about… When you say you're gonna do a farewell tour, please don't say that, because… [Laughs] I'm saying that because I'm talking from experience. Before K.K. [Downing, guitar] retired, it was gonna be a farewell tour, but then when Richie came along — the incredible guitar player Richie Faulkner came along — not only did he give us a boost, which is a natural thing… It's like when you change a guy on your football team or your basketball team, the team is the same but you bring in another player and the dynamics should shift, the energy should shift. And that's what happened with Richie. The sense of longevity is still within us. I don't think we're going… Even though the clock is ticking, we're not even thinking about the end. What else can we do? It's gonna be more live shows and more records for the future."

Rob: "It still comes down to the really rudimentary stuff. It's all about riffs — it really is about riffs and just the way the notes are arranged. I always emphasize the melodic side of what we do in PRIEST. There's always melody. Even in the fiercest stuff, there's some kind of melody that you can kind of attach yourself to. So in all the years that we've been together, I don't think that's changed one bit. I've got most of the PRIEST album on my phone — the new PRIEST album — but it's very rudimentary, and it is all about the simplicity of the riffs. And that would be a great challenge: could you make another album in thirty days? That would be a throwdown, wouldn't it? And I dare say that if push came to shove, we'd have a damn good go. It's different in today's world that… I wouldn't say that we enjoy the luxury of waiting, it's just the way that things go on in life. We're still very disciplined when we go in the studio. I mean, we have set hours. We take the weekends off. We have set hours. We get there, we do the work for the day, and then we leave. And I think it's important, as a musician, to have that sense of responsibility, not only to yourself as a musician, but to your bandmates. 'Cause we're all in this together. Everybody's as important as everybody else, everybody has something valuable to share. And ideas are popping in the room right from the moment that the sound starts happening. So who knows? This one that we're working on now, it's coming together pretty quickly, but it'll be a long way off until the final crescendo, just because we're so fanatical. When you've left this incredible treasure trail behind you, we're always… We're always looking backwards, but we know we have a sense of trying to get to that next place, whatever that place might be. So it is increasingly challenging. We don't just a bang a song together. It's very deliberately kind of thought out without killing the soul and spirit. When you get spontaneous, that's a great feeling. If you can capture that spontaneity, that can be within the song, but what goes around that song can take a while to accomplish at this point, hundreds of songs later. But it works, and it's a joy making this PRIEST record right now."