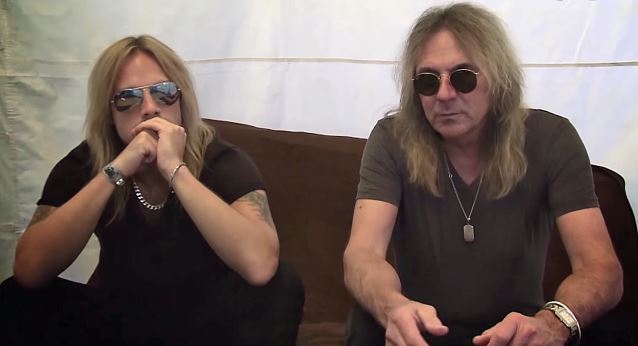 JUDAS PRIEST's GLENN TIPTON: 'I Think There's Another Album In Us'

Rockpages TV recently conducted an interview with JUDAS PRIEST guitarists Glenn Tipton and Richie Faulkner. You can now watch the chat below. A couple of excerpts follow (transcribed by BLABBERMOUTH.NET).

On Faulkner's contributions to PRIEST's 2014 album "Redeemer Of Souls":

Glenn: "If you call yourself a guitar player, you must never forget image and exciting playing. You've gotta be a lead player, you've gotta be a rhythm player, you've gotta have showmanship, but you've also gotta be able to write, I think. Then you can call yourself a complete guitar player. There are great guitar players, but not complete guitar players. When Richie walked through the door, the important thing is that we got on. It's no good having somebody in the band that you don't get along with, or you argue with, or you don't like. And then it's how Richie dealt with the live aspect of things, which couldn't be any better; it was a miracle, really. So with those two obstacles over and done with, I had already got confidence that Richie would bring things to the table on the writing level that were appropriate and exciting, and that's exactly what he did. So I was never nervous in that aspect, because he had already proved himself on stage and we already knew each other."

Richie: "And I think by the time, as Glenn said, we got in the studio, there wasn't really any nerves, as such, as to if it's gonna work. You're ingesting that music every night, and every night's slightly different. We might play something slightly different or come up with something slightly different in the live scenario. And then we were playing the twin lead parts every night and we just seemed to lock in. So when we got into the studio, we'd built up those relationships, we were friends, we were buddies. If you've got an opinion, we had asked for it, or you got asked for it, and it'll get valued. You might not agree all the time — that's just the way it is — but you know that your opinion is gonna be valued. And if there's something that could be better, I could say it to you. I could say, 'I think it could better,' and it gets trusted and you work with it and it gets better, you know what I mean?! Rather than being afraid and [thinking], 'I'm not gonna say anything.' And then you come up with something that might be not as good as it could be."

On the possibility of PRIEST making a follow-up to "Redeemer Of Souls":

Glenn: "I think there's a chance a good we will do another album. You can never say what's around the corner — nobody's sure what's gonna happen — but I think it's pretty safe to say we'd like to do another album. Of course, the thing is we've gotta better 'Redeemer'. If you don't better it, people will say it's a crap album, if we don't better 'Redeemer'. So there's a bit of a challenge there, but we've always risen to challenges, and I don't think anybody would shy away from this. I think there's another album in us."