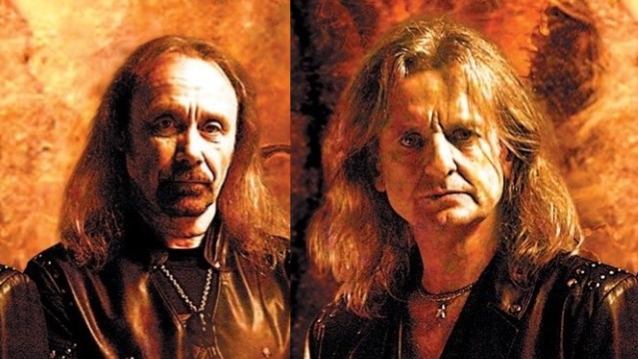 In a brand new interview with "Rock Talk With Mitch Lafon", JUDAS PRIEST bassist Ian Hill was asked if he could still have a friendship with fellow PRIEST co-founder K.K. Downing, who left the group in 2011 amid claims of band conflict, shoddy management and declining quality of performance.

"Musically, we've parted company, really," Hill said (hear audio below). "I'm sure if I called him up and said, 'You fancy coming down the pub,' he'd say yes, I'm sure. I know he would. But I haven't had any contact with him over the last couple of years because we've been so busy. But I think, musically, we've parted ways, really. Probably the less said, the better. I'll get slated on Blabbermouth, probably, for saying anything. So I've gotta be careful. [Laughs]"

Last fall, Downing dismissed as a "load of bollocks" Hill's explanation for why K.K. wasn't invited to rejoin the band following Glenn Tipton's decision to retire from the road due to his battle with Parkinson's disease.

"We were like brothers; we went to infant school together and secondary school together, and we lived our career together," Downing said. "But I'm not totally happy about what's being said. Ian seems to be [saying] things like, 'None of the fans are missing K.K.,' and, 'Richie [Faulkner, Downing's replacement] has brought a new energy to the band.' And I'm going, 'Ian, dude, on that last tour, I was the energy. I slowed down because people weren't keeping up with me.'… So I'm thinking, Ian, get a grip with yourself, mate. You've just replaced the energy with some energy. Fine — well, great. But that's not moving forward, Ian."

Tipton was diagnosed with Parkinson's disease five years ago — after being stricken by the condition at least half a decade earlier — but announced in February 2018 he was going to sit out touring activities in support of PRIEST's latest album, "Firepower".

Downing later said that he believed the second letter was "a key reason" he wasn't invited to rejoin PRIEST following Tipton's decision to retire from touring.