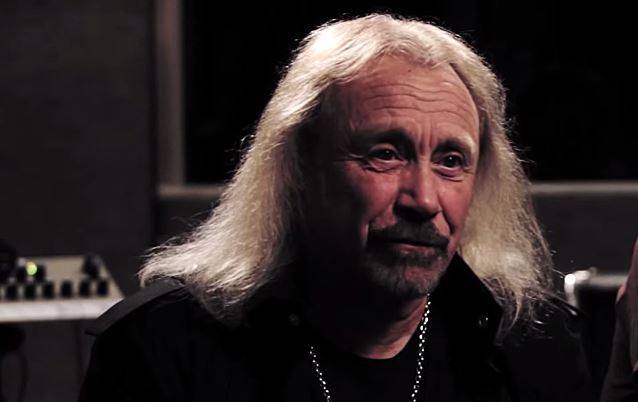 Harley of the 95.7 QMF radio station in Louisville, Kentucky recently conducted an interview with bassist Ian Hill of British heavy metal legends JUDAS PRIEST. You can now listen to the chat below.

Speaking to The AU Review, Hill stated about how fans have come up to him and told him that PRIEST's music has helped them get through difficult times. "I imagine it's the same with anything; you'll get someone who's sick, whether terminally or otherwise, their favorite thing, not matter what it is, it's a comfort thing," he said. "Because of the aggression in our music, not just our music, we're talking [IRON] MAIDEN, LED ZEPPELIN and everybody else; the armed forces listen to our stuff. We have people turn up to our shows and we're chatting to them afterwards and they're, like, 'Oh, I used to fly helicopters in Vietnam and I'd listen to you all the time,' which is great. But I imagine anyone who's recovering or in a bad way, it's gonna cheer them up a bit."

Asked when PRIEST might finally call it quits for real, Hill told the Herald-Journal: "We'll see how we feel at the end of this cycle. I can't see any reason not to keep going. We have a whole new energy and enthusiasm about the band. We might go straight back into the studio after this tour and do another album. It's something you can't imagine yourself not doing. And we're all getting on; there's going to be a time when we physically can't do it anymore, and that time is coming soon. So we'd better do all we can while we can still do it, you know? We have no plans to stop. Let's put it like that."