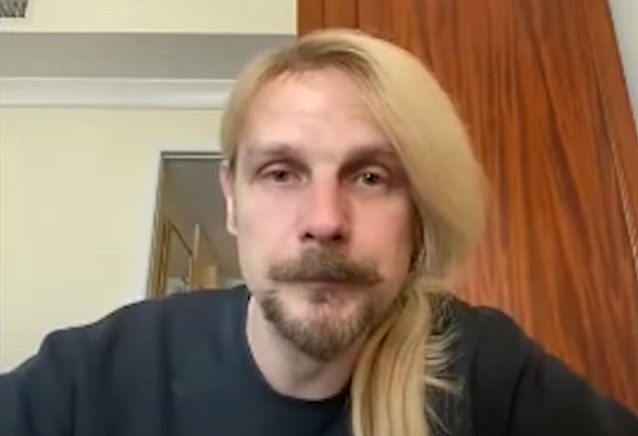 JUDAS PRIEST guitarist Richie Faulkner has once again opened up about the life-saving surgery he underwent more than a year ago.

On September 26, 2021, the now-42-year-old British-born musician suffered an acute cardiac aortic dissection during a performance at the Louder Than Life festival, just a short distance from Rudd Heart and Lung Center at UofL Health - Jewish Hospital in Louisville, Kentucky. It took the hospital's cardiothoracic surgery team, led by Dr. Siddharth Pahwa and also including Drs. Brian Ganzel and Mark Slaughter, approximately 10 hours to complete the surgery, an aortic valve and ascending aorta replacement with hemiarch replacement.

Asked in a new interview with Mexico's El Cuartel Del Metal what it has been like being back on the road after his operation, Richie said (as transcribed by BLABBERMOUTH.NET): I've had a great support system, both at home and on the road as well. PRIEST and our crew have been really supportive. I've done everything that the doctors told me to do. I haven't rushed anything. I've done everything that they told me I could do, if you know what I mean. And I've been fine. The last surgery I had was in August and I had enough time to heal properly and get back out on the road with this one. I'm on medications, so that's all fine. So, yeah, I'm fine. As I said, I've had a great support system. I was very lucky. I was lucky just to get to the hospital in the first place, and I'm lucky to be here. There's people that weren't so lucky. It's one of those conditions that some people don't even get to the hospital. But I was lucky to get to the hospital. I was lucky to be worked on. And they saved my life. And I'm still lucky to be here playing metal for you guys."

Faulkner, who returned to the road with his PRIEST bandmates in March, also reflected on the onstage episode that resulted in him being rushed to the hospital, saying: "I remember it well. I remember up until the point when I was in the ambulance, I think. I think I went into shock and everything kind of went blurry from there. But I remember playing. I remember the moment when it was about halfway through 'Painkiller' and something happened in my chest and I thought, 'That's a bit strange. That doesn't usually happen.' And it was obviously a big pain in the chest. And I remember, as I was playing the song, I went kind of light-headed. And I'd never fainted before, but I felt like, 'This is what it feels like. And I might faint soon.' I remember I was conscious of moving away from the side of the stage, because I thought if I fainted and I fell off the stage — the stage was quite high, so I thought if I fell off, I could do myself some damage. And I remember all that.

"What happened was at the end of 'Painkiller', I lift the guitar up into the air — usually I do that," he added. "And I think I tried to lift the guitar up, and I couldn't — I didn't have the strength because all the blood had gone; it was running out. It dissected, so all the blood was kind of doing different things. I didn't have the energy to lift the guitar, and I knew something was terribly wrong. But, again, luckily, there was a medic on hand with the ambulance and they got me to the hospital in time and they were able to save me. But I remember up until the point. But I didn't know what it was. I think if I would have known how dangerous it was, I would have gone straight off. But I didn't know. So I carried on playing. I just didn't know what it was, really."

In September, Faulkner revealed that he underwent a second heart surgery in early August. He later explained to "That Fuzzing Rock Show": "They found something just before the European leg [of JUDAS PRIEST's world tour]. And it was basically a hole in the repair and there was a leak — I'd basically sprung a leak in there — and it was causing a sack to form around my heart. So they found it just before the European leg. And the surgeon said it was okay for me to do Europe, [so] I was actually touring Europe, playing Europe with this sack and a leak inside there. What that meant was when I got back from Europe, two days later I was back in the hospital for another open-heart surgery… But yeah, it was a bit daunting, to be honest, to be touring Europe knowing that that was going on. But you've gotta put your trust in the doctors, and it worked out okay."