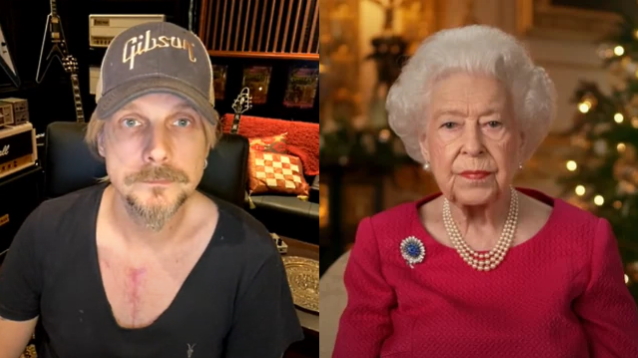 JUDAS PRIEST's RICHIE FAULKNER On QUEEN ELIZABETH II's Death: 'It's The End Of An Era'

JUDAS PRIEST's Richie Faulkner has commented on the passing of Queen Elizabeth II, the longest reigning monarch in British history, who died a month ago at 96 years old.

The 42-year-old British-born guitarist, who joined PRIEST in 2011, discussed Queen Elizabeth II's death in a new interview with the Rock 95 Mankato radio station. Speaking about the fact that some people were willing to wait at least 13 hours to say their last goodbyes to the Queen, Richie said: "Everyone mourns and pays their respects in different ways, obviously. I mean, people were waiting up to 24 hours, I think, just to see the coffin. The Queen was in the military when she was younger, as all monarchs, I think, have to do.

"I wasn't there [to pay my respects in person]; I wasn't in the country to do that," he continued. "But the thing about the Queen for me is it's one of those things that has always been a staple, a consistent thing in 80 percent of people that are alive's lives. So if you are of a certain age, the Queen has always been there. So it's weird to not have that there. Although she wasn't there — she's not there in the room — but the Queen has always been there for all of your life, and that staple, that consistent thing being there is not there anymore. It's the end of an era. And it's interesting to see the new monarch in the Internet age. There's already a ton of memes out there. So it's interesting to see."

Buckingham Palace spent decades preparing for the Queen's death, including planning her funeral, which was held on September 19. The Duke of Norfolk did much of the planning, and he also was in charge of planning King Charles III's coronation.

The Queen's body lay in state at Westminster Hall for four days so the public could pay their respects to the late monarch. Eight pall bearers carried the oak and lead-lined coffin into Westminster Hall, placing it on a raised platform known as a catafalque.