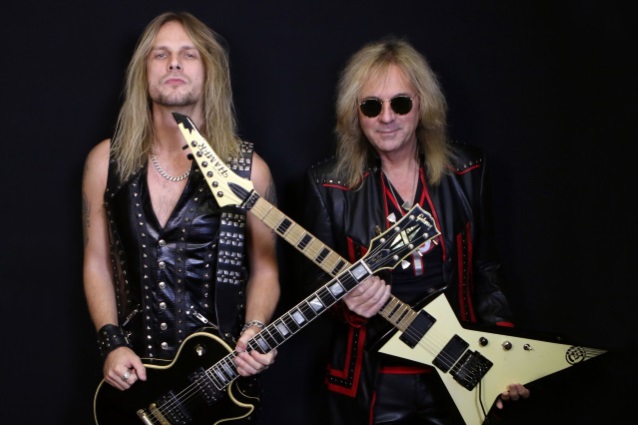 Richie Faulkner has assured JUDAS PRIEST fans that Glenn Tipton will play with the band again despite the fact that he is battling Parkinson's disease.

The guitarist, who is now 70 and has appeared on every PRIEST album since the band's 1974's debut set, "Rocka Rolla", is not quitting the band, but simply cannot handle the rigorous challenges of performing live. Joining PRIEST for its upcoming dates will be the band's co-producer and HELL/ex-SABBAT guitarist Andy Sneap.

Speaking to Indiana's X-Rock 103.9 radio station earlier this week, Faulkner said that Tipton contributed heavily to PRIEST's upcoming album, "Firepower", despite the challenges of his disease.

"Glenn Tipton is involved in this record in the same way that he always has been," Richie said (hear audio below). "The only difference this time is that he's been battling with Parkinson's. If anything, it's a testament to what a hero Glenn Tipton is. If you listen to that record and you listen to the intensity, and you can hear the dedication that's gone into that, and the man is suffering 10 years of Parkinson's? Hats off to the guy. It's just a testament to his love for the band, his love for the fans and his dedication to the cause. Obviously, live is a different scenario. In the studio, you can take time and redo things and just take time and he's more comfortable. Live is a different kettle of fish. So Glenn's had to step back a little bit from that. But rest assured, I think we're gonna see Glenn Tipton at some point in the tour."

He continued: "We've already said, at some point he's gonna come out, as and when he's willing and able and he's healthy enough to do it and turn up and do some songs with us, and I think the fans will go nuts. I think it's gonna be unannounced, it's gonna be a surprise. And who knows, man? Maybe we can keep him out — we can [get] him to stay out on the tour bus with us and come around the world with us. But we'll see Glenn Tipton on stage again — rest assured."

Faulkner joined PRIEST in 2011 as the replacement for the band's founding guitarist K.K. Downing.