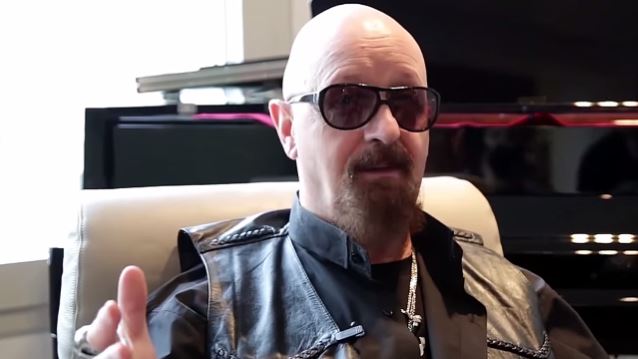 JUDAS PRIEST's ROB HALFORD: Heavy Metal 'Is A Bloke's World, For The Most Part'

Radio New Zealand recently conducted an interview with singer Rob Halford of British heavy metal legends JUDAS PRIEST. You can now listen to the chat using the audio player below.

Asked if he thought the metal world would not be accepting of the fact that he was gay when he decided to address the subject of his sexuality publicly for the first time during a 1998 interview with MTV, Halford said: "It's an alpha-male-dominated world, although, in recent years, we've seen some fantastic progress with the girls grabbing on the mic and the guitars. I mean, you go back to people like Joan Jett and Lita Ford — they were, like, groundbreakers — but, more recently, Maria Brink from IN THIS MOMENT or Lzzy [Hale] from HALESTORM. But it is — it's a bloke's world, for the most part, in heavy metal, and it's a straight world, to a great extent. I'm lucky to have been able to go through to where we are now and see some very slow progressions of acceptance, but it's still not completely [embraced by some] people."

He continued: "When I made that move [to speak about my sexuality publicly], it was for my own personal release, and it did wonders for me. The most extraordinary thing was the fact that the fans went, 'Rob, we don't care about that side of you. We just wanna hear you sing, we wanna see PRIEST, we wanna see the show, hear the songs,' and that was a tremendous sign of tolerance and intelligence."

Halford also spoke about the fact that some fans felt his leather-and-studs stage look should have been a giveaway that he was gay. He said: "Well, it's irony — isn't it? — in big capital letters. In the gay world, there's a section of our community that is very much involved in that side of things, but it never really crossed my mind, in all honesty. I've said this before: When I found all those early embellishments to find the visual side of PRIEST, the sexual connotations never entered my mind for a second, but later on, I saw the humor side of it, and definitely the irony."

Halford recently told The Press Of Atlantic City that he expected metal fans to alienate him when he first spoke about his homosexuality. "I probably deluded myself into thinking I would get rejection," he said. "Nothing could have been further from the truth."