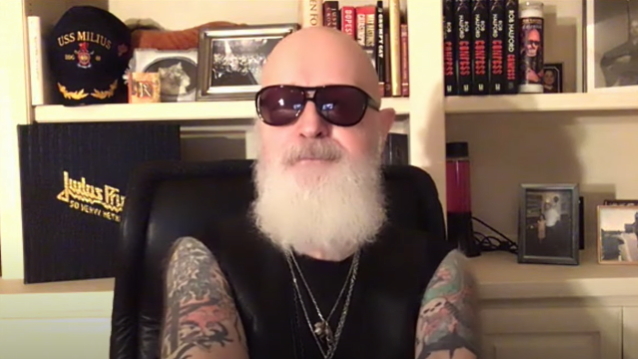 JUDAS PRIEST's ROB HALFORD: 'It's Gonna Be Great To Be Back On The Road'

With a career spanning the past 50 years, Halford has without a doubt experienced the extreme highs of success and darker times throughout his life, which is documented in his book, "Confess". Halford's autobiography explores numerous anecdotes on his life and career, including a time where he may have offended Marie Osmond with a whip.

Rob speaks with Matt about his book and reflects on the importance of his decision to publicly come out and what it meant for his career and personal life. Halford also details losing his partner due to self-harm, and how that moment tested his journey with sobriety. The outspoken and uninhibited artist also goes on to share his musical influences and heroes, which include Tina Turner, Elvis Presley, Little Richard and many more, and Rob also shares what is next for his band post-pandemic.

On the topic of PRIEST's current status, Rob said (as transcribed by BLABBERMOUTH.NET): "Like all the bands around the world, we are just chomping at the heavy metal bit to get back on the road again. If you go to the PRIEST web sites, you'll see all the dates that we've been rescheduling, like we all have. And I'll be heading back to the U.K. soon to start jamming and rehearsing. We've gotta put a setlist together, which is getting more difficult by the years. Choose a song from how many albums and hundreds of songs. But we'll do it. It's gonna be great, man."

Earlier this week, JUDAS PRIEST announced the rescheduled dates for the North American leg of its 50th-anniversary tour. Produced by Live Nation, the "50 Heavy Metal Years" trek will feature SABATON as openers. It will kick off on September 8 in Reading, Pennsylvania and run through October before concluding on November 5 in Hamilton, Ontario.