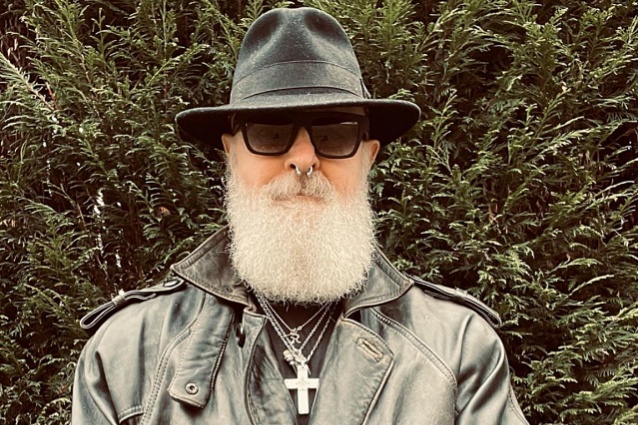 In a new interview with Estonia's Sky.ee, JUDAS PRIEST singer Rob Halford was asked if there is a country whose culture he was maybe most surprised about or which made the biggest impact on him. He responded (as transcribed by BLABBERMOUTH.NET): "I think there's many. When you come to Estonia for the first time… I love visiting all of these different places. It's a blessing. We're very grateful to have the opportunity to take our metal around the world like we have.

"I think probably one of the most at first unique experiences — again, we go back quite a while — was when we went to Japan for the first time," he continued. "Because we knew a little bit about the Japanese culture, but to actually go there and to see the balance of their traditions and their culture that is still very strong and potent, but to have this acceptance of this kind of music in their country was just something very special and extraordinary. And JUDAS PRIEST was one of the very first bands, first metal bands, to go to Japan. Very few other bands had been there at that time. We opened the doors for metal in Japan. So that's probably one country

"When you get the chance to travel to these far places like Rio De Janeiro or Buenos Aires, places that, as a kid in your dreams, you could only read about, so to actually go to these places, what it does, it makes you see how small the world is," Rob added. "And it makes you see how we're all connected. We may not speak the same language, but all of us go through so many things in our lives that are similar, and that's what keeps us together as humanity. We all have the ups and downs, we all have the laughter, we all have the tears, we all have the struggles, we all have the successes. It doesn't matter where you go in the world. And that's one of the great, beautiful blessings that I registered many, many years ago — it gave me a better understanding of life; it gave me a better understanding of people, how we're all the same. It doesn't matter what your religion is, what your sexual identity is, what your political beliefs are — it doesn't matter. We're all people, we all have the same kind of lives on this planet the short time that we're here. And so we must do everything we can to try and get as much out of it.

"So, there's a speech. I have a tendency to make speeches as I've got older. [Laughs] But I hope I'm able to express the answer to your question, that it's a joy to be able to travel and to see so many of our beautiful metal maniacs anywhere in the world."

JUDAS PRIEST will finally get inducted into the Rock And Roll Hall Of Fame this year. The band will receive the Musical Excellence Award at the fall 2022 event, which will honor Eminem, Dolly Parton, DURAN DURAN, Lionel Richie, Pat Benatar, EURYTHMICS and Carly Simon in the Performers category.