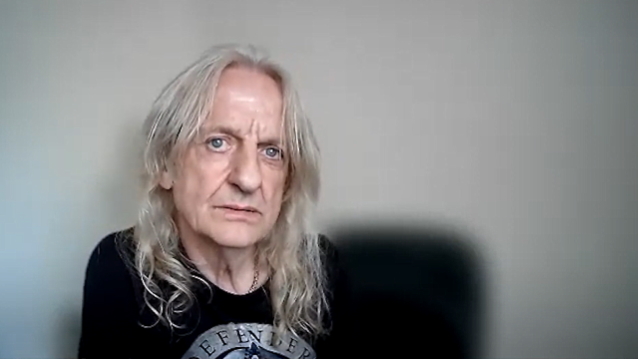 K.K. DOWNING 'Didn't Believe A Word' Of What He Wrote In His First JUDAS PRIEST Resignation Letter

In a new interview with Yesterdaze News, K.K. Downing discussed his departure from JUDAS PRIEST as well as the circumstances that led to his decision to write an autobiography, "Heavy Duty: Days And Nights In Judas Priest". The guitarist said (as transcribed by BLABBERMOUTH.NET): "I was totally frustrated from the get-go. Everything came to a head at the end of 2010, and I just had some kind of breakdown. I quit. I wasn't ready to do that farewell tour because I didn't think I would enjoy it because I had problems on the tour before because the band wasn't tight and I had issues with everything that was happening and I felt that we weren't the mighty PRIEST that we'd been before. And people travel a long way and make a lot of sacrifices to come to shows these days. It's not like the old days where we used to go to everybody's town... Things have changed.

"It was a set of circumstances," Downing, who formed PRIEST in the late 1960s with bassist Ian Hill, continued. "It's regretful. It was a very frustrating time for me, so I need to set the record straight as best as I can, really, because I was being made to look the bad guy. I mean, I can understand fans thinking certain things about me. 'K.K.'s retired to look after his golf course.' That's what you were being told. I've got a professional management company to look after my golf course, which had already been open for six years. The so-called retirement letter that I sent in, which was something I regretted, because I didn't believe a word. It was the second letter I sent in to the band, saying, 'Ignore everything in the first letter,' the so-called retirement letter. 'Ignore everything. Here's the reasons.' But they preferred to tell everybody the content of the first letter that I told them to ignore everything as misinformation, which it was."

Three years ago, the first resignation letter Downing sent to his bandmates was described as "a graceful exit note, implying a smooth retirement from music," while the second was "angrier, laying out all of his frustrations with specific parties."

Downing has said that he believes the second letter was "a key reason" he wasn't invited to rejoin PRIEST following Glenn Tipton's decision to retire from the road due to his battle with Parkinson's disease.

K.K. told Rock N Roll Archaeology that he initially wanted to "keep the peace" and "not burn any bridges" with his former bandmates, especially since he realized that he would be in a business relationship with them for the rest of his life.