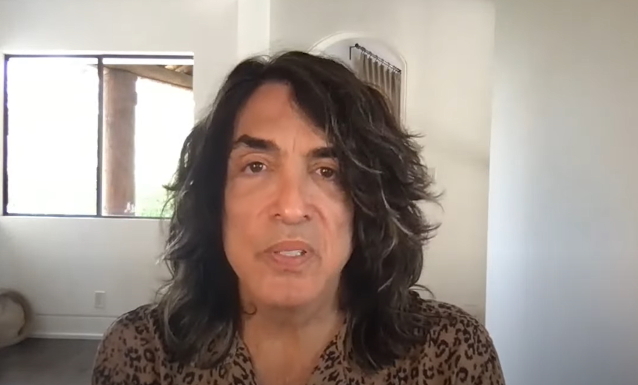 Paul Stanley spoke to SiriusXM's Ozzy's Boneyard about KISS's new A&E documentary "Biography: KISStory", which is set to premiere with a two-night event on June 27 and June 28 from 9 p.m. ET to 11 p.m. ET.

"It's a real personal look at the band and Gene [Simmons, KISS bassist/vocalist] and I," Paul said (as transcribed by BLABBERMOUTH.NET). "'Cause Gene and I were there; we were together since we lived in our parents' homes, and we're there today. So that kind of bookends the whole story of the band. And it's much more intimate and personal than anything we've done before. It lacks a lot of the razzmatazz and the bigger-than-life. It's more almost like sitting with us. There's a lot of conversations in it of just Gene and I on my sofa, hanging out. Kudos to Gene. He was willing to let down the guard and show a different side of him — a side that, over years, has become much more pronounced.

"People have all these ideas about he and I butting heads all the time," Paul continued. "And we've never really butted heads. We've certainly been very competitive at different times, and that healthy competition is what helped make us what we are. So, I think the spats have been exaggerated. But I think one thing you see at this point is we couldn't get along better. We have so much to be grateful for and so much to look back on, and to sit around and share memories or reminisce, it's a very different feel to this."

Stanley also addressed the fact that original KISS members Ace Frehley and Peter Criss did not get involved in the making of the documentary.

"Some people might take exception to it… Some KISS fan might say, 'Well, how come there isn't more of Ace and Peter?'" Paul said. "Truly, those guys didn't want to be a part of it without certain… I think there was talk of final approval of footage and editing, and that's fantasy — that's fantasy. It's really a story of the band.

To promote the documentary, KISS took the stage on June 11 for a special performance at the 2021 Tribeca Festival in New York City. For the first time ever, the band played at the festival directly following the screening of part one of "Biography: KISStory". The two-part documentary event was part of the festival's 2021 TV lineup.