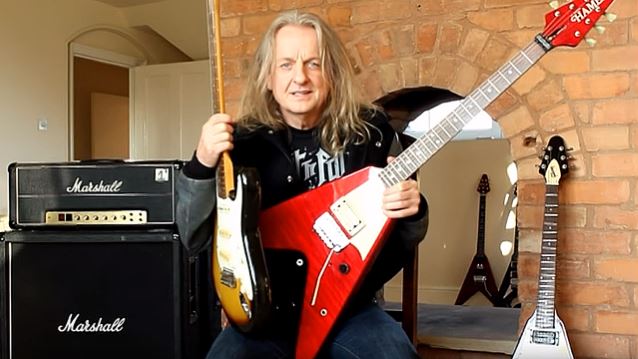 K.K. DOWNING Is 'Shocked And Stunned' He Wasn't Asked To Rejoin JUDAS PRIEST

Former JUDAS PRIEST guitarist K.K. Downing says that he was "shocked and stunned" that he wasn't approached to rejoin the band following Glenn Tipton's decision to retire from the road due to his battle with Parkinson's disease.

Tipton, who is now 70 and has performed on every PRIEST album since the group's 1974's debut set, "Rocka Rolla", is not quitting the outfit, but simply cannot handle the rigorous challenges of performing live. Joining PRIEST for its upcoming dates will be the band's co-producer and HELL/ex-SABBAT guitarist Andy Sneap.

In a statement released Tuesday morning (February 27),Downing said that he now knows "more clearly than ever" that he did the right thing by leaving the band when he did because he believes that his contributions to PRIEST's legacy are "unappreciated by more than one member."

K.K. said: "The news that Glenn has finally been forced to come to terms with his unfortunate condition long term came with deep regret and sadness for me. Equally, this ending of our guitar duo era is also something that I have to come to terms with. The insatiable appetite that myself and Glenn had for creating inspired and unique music for the world to enjoy for many decades, is something that can never be erased. However, everyone who has witnessed the evolution of our beloved music must come to terms with the fact that things will inevitably change, or just simply end.

"I have to state with great sadness also that I am shocked and stunned that I wasn't approached to step into my original role as guitarist for JUDAS PRIEST. Whether I could have stepped back into the band or not, the potential for this situation arising never entered my head when I departed — although I too am officially and legally still a member of JUDAS PRIEST. However, I know now more clearly than ever that I did the right thing by leaving the band when I did — as it seems that my time spent in the band, and my value in terms of crafting its huge legacy, was and is unappreciated by more than one member. I sincerely hope, for the fans' sake, that the decision not to approach me was not a financial one.

"I know Andy Sneap — and he is one of the greatest contributors to rock and metal that you will ever have the privilege to meet. To that end, I have no doubt that his contribution to the new JUDAS PRIEST album was much more than just as a producer. All that's left is for you the fans to go out and enjoy the band as it is, in order to complete a part of music history in which every one of you has played such an important role."

During a 2015 interview with Guitar International, Downing elaborated on his reasons for leaving PRIEST. He said: "I had lots and lots of reasons for not continuing, as I wasn't content with things as they were. I wasn't happy with the band's live performance. I thought it could have been better; not that the fans would notice. To me, PRIEST was always a stealth machine and that's what I liked about it. Even though you get older, you still need to be able to deliver the goods. People came a long way and paid a lot of money to see us, so you've got to make sure you still give 110 percent. I thought that should be inherent and what it should always be."

K.K. also said that he didn't think his return to PRIEST would "ever, ever happen." He explained: "Obviously I'm quite happy for Richie Faulkner to be in the band. But I really wasn't expecting to have someone who had so many familiarities as me, the looks and everything. At a glance, nothing too much has changed for the fans."

It was announced late last month that Da Capo Press has set a September 18 publication date for Downing's memoir, "Heavy Duty: Days And Nights In Judas Priest". The book was co-written by the Scottish author and journalist Mark Eglinton, whose previous collaborations include "Official Truth, 101 Proof" with Rex Brown of PANTERA and "Confessions Of A Heretic" with BEHEMOTH's Adam "Nergal" Darski.

PRIEST's new album, "Firepower", will be released on March 9 via Epic.