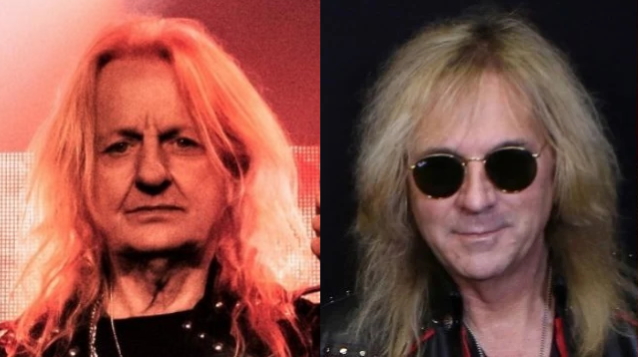 K.K. Downing has disputed Glenn Tipton's claim that K.K. "never approached" any of the members of JUDAS PRIEST about returning to the band prior to Glenn announcing his retirement from touring.

In a recent interview with Guitar World magazine, Tipton said that he and the rest of PRIEST's current lineup weren't aware of Downing's desire to come back to the band when they made their decision to hire producer Andy Sneap to play guitar on the "Firepower" tour. "[K.K.] never approached any of the band and asked to rejoin, so for all we knew, he didn't want to rejoin," Glenn said. "He said he wanted to leave the band and then leave the music industry. He told us he was desperate for a new kind of life."

When Guitar World writer Jon Wiederhorn asked Tipton directly whether Downing expressed an interest in rejoining PRIEST for the "Firepower" tour, Glenn said: "No. Right before we got Richie [Faulkner to replace K.K. in 2011], [bassist] Ian [Hill] said, 'If you really want to come back, you'd better come back now' because we were moving on. But he didn't do anything. He didn't ask to come back."

The same day that BLABBERMOUTH.NET published some of Tipton's comments from the Guitar World interview, Downing released an audio statement to this web site disputing some of Glenn's assertions, including the suggestion that K.K. would have been accepted back into the JUDAS PRIEST camp for the "Firepower" tour.

Downing said: "There was not a position for me in the band until Glenn retired. And when he did, I quickly, obviously, stated that I was shocked and stunned not to receive a phone call [asking me to return to the band]. At that point, previous to that, working backwards, they were all in love with Richie, [as] posted on [BLABBERMOUTH.NET], stating that none of the fans are missing K.K. and Richie has brought a new energy to the band. Also Ian told me directly in person that Richie was a great guy and a great songwriter, despite only achieving two albums in the last 12 years. But that's curious.

"And on top of that, really, what the world doesn't know, really, [is] that the farewell tour [in 2011] that we were all planning to retire on and end the band, the 'Epitaph' tour, that was what I decided to not participate in," he continued. "That was it. That's what I thought I was doing — not leaving the band. Because we were all leaving the band; we were all going to finish the band and retire. So I thought that that's the only thing that I was doing — was not participating in the farewell tour, quite simply because I really didn't think, with everything that was happening, that I was going to enjoy the tour from a musical standpoint. And I didn't want to end my long, credible history and legacy doing a tour for the fans that I wasn't actually enjoying."

Downing added: "What people don't know is in April that year [2011], and I have the e-mails, I was speaking to Ian in April about changing my mind, 'cause all of my friends were encouraging me to just do the tour, saying, 'You started the band. You need to finish it.' So I was talking to Ian, on and off, over a week, and I actually told him that I was reconsidering and asked him to send me over the setlist, which he did. And I called him back and said, 'It looks great,' because setlists were always a bone of contention in the band, really. And the next day they released a press release that I retired from the band. This is what people don't know. So, obviously, I took from that they didn't want to include me. They had already kind of, obviously, anointed themselves and got familiar with Richie and it was a family and I was out. So, really, I consider myself ousted as much as anything else, because no one other than Ian got back to me, called me — no one from the management, nothing. So I felt pretty dejected about all of that, really. So if that was the way it was gonna be, that was the way it was gonna be. But, obviously, Glenn retiring was an ideal opportunity [for me to come back], because the musical thing and everything, the tension between me and Glenn on stage, more so than anything musically, I wasn't happy with. So [this would have been a chance for] me [to] play alongside, obviously, a very competent player like Richie."

According to Downing, he has written to his former bandmates in JUDAS PRIEST "on two or three occasions now — recently, probably since about 2017 — asking to be reinstated. But even when they chose to go as a four-piece [this past January, only to change their minds five days later], they never gave me any consideration, an opportunity to come back into the band," he said. "And I absolutely am totally convinced they never would previously, irrespective of what Glenn says."

K.K. went on to say that several business-related issues have arisen between him and JUDAS PRIEST which have contributed to the increased tension between the two camps.

"Since about 2017… Previously they upheld their promise, even though they never gave my any accounts, they would make disbursements to me for what I was promised — you know, part of what I was entitled to from everything that I was a part of; obviously merchandise, et cetera," he said. "And then that all stopped. I started to get legal letters. And I implored them, 'Don't go down this route. Let me come down. I'm happy to sit around a table and discuss any issues that need to be discussed.' And they said no. And so the legal letters kept coming. They've ousted me as a director [of the PRIEST company Judas Priest Music Limited]. They've kicked me off the board, as it's three of them and one of me. I'm still a 25 percent shareholder, but they said it's worthless, it isn't worth anything, and they don't pay me anything of anything that I was involved with — period. So anyone that goes out and buys the 50th-anniversary box set, I do not get anything from it. I've asked them if I'm gonna get anything from it and they haven't returned my e-mails. And it's the same with any of the merchandise that you see on sale at the venues or in retail or anywhere else."

Downing also once again said that PRIEST attempted to prevent him from using the KK'S PRIEST name for his new band, in which he is joined by ex-JUDAS PRIEST singer Tim "Ripper" Owens, guitarist A.J. Mills (HOSTILE),bassist Tony Newton (VOODOO SIX) and drummer Sean Elg (DEATHRIDERS, CAGE). "Both me and my record label and management got legal letters when they tried to stop me going forward with my band, KK'S PRIEST," he said. "We chose to ignore the correspondence, taking the risk that they wouldn't take it any further. I'm glad to say that they haven't. But I'm not happy that they tried to stop me doing what I do, especially when they denied me the opportunity."

In the Guitar World interview, Tipton said that he was okay with JUDAS PRIEST and KK'S PRIEST existing at the same time. "I just wish [K.K. would] grow up a bit and stop saying ridiculous things," Glenn said. "I'd like to see both bands go on and enjoy heavy metal, as you should do. It would be nice to see our careers out together, even if we're in different bands."

K.K. left PRIEST in 2011 amid claims of band conflict, shoddy management and declining quality of performance. In 2018, Downing revealed that he sent two resignation letters to his bandmates when he decided to quit JUDAS PRIEST. The first was described as "a graceful exit note, implying a smooth retirement from music," while the second was "angrier, laying out all of his frustrations with specific parties." Downing later said that he believed the second letter was "a key reason" he wasn't invited to rejoin PRIEST after Tipton's decision to retire from touring.

In his 2018 autobiography, "Heavy Duty: Days And Nights In Judas Priest", Downing wrote that he told Tipton and PRIEST co-manager Jayne Andrews that he had "hated" them both "since 1985." Last year, he explained his outburst to Classic Rock magazine: "I was angry. Glenn had formed a relationship with Jayne from day one, and it felt a bit like a John-and-Yoko situation. I didn't like that."

Downing has called Faulkner his "clone" and revealed that he "never found" Tipton "to be particularly easy to get along with. Very early on, I was fully aware of the limited conditions under which he operated," K.K. wrote in his book. "If you were going to relate to him, you would do so entirely on his terms."