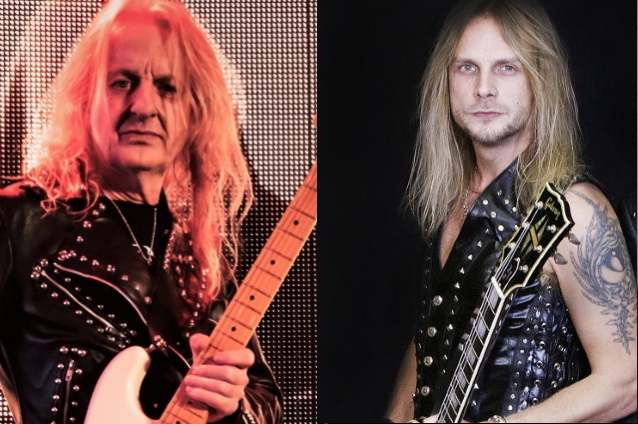 Former JUDAS PRIEST guitarist K.K. Downing has wished his replacement, Richie Faulkner, a "speedy recovery" after Faulkner suffered an acute cardiac aortic dissection during the band's performance at the Louder Than Life festival.

After being rushed to the UofL Health - Jewish Hospital on September 26, Faulkner underwent an approximately 10-hour surgery — an aortic valve and ascending aorta replacement with hemiarch replacement — by the hospital's cardiothoracic surgery team, led by Dr. Pahwa, and also including Drs. Brian Ganzel and Mark Slaughter.

Asked in a new interview with The Blog Of Rock if he "sent any prayers" to Richie in the days after his surgery, Downing said (as transcribed by BLABBERMOUTH.NET): "Yeah, absolutely. All I could do is I've been saying to people that it's very sad. Everybody wishes Richie well and a speedy recovery. I think the guys had over 20 shows [left to play on the U.S. tour], so I hope for the guys, when Richie recovers, they can get back out there. Because, obviously, I feel for the fans and, of course, SABATON, who was playing as well. It's a terrible thing, but we can only wish Richie well. But I know he's young and he's strong, and I'm sure that everything's gonna be fine."

Faulkner had "an aortic aneurysm and complete aortic dissection" while performing the closing song of PRIEST's set on the final day of Louder Than Life in Louisville. Faulkner later said in a statement: "As I watch footage from the Louder Than Life Festival in Kentucky, I can see in my face the confusion and anguish I was feeling whilst playing 'Painkiller' as my aorta ruptured and started to spill blood into my chest cavity."

After Louder Than Life, JUDAS PRIEST postponed the remainder of the U.S. dates on its rescheduled 50th anniversary tour, dubbed "50 Heavy Metal Years". The trek kicked off on September 8 in Reading, Pennsylvania and was slated to run through October before concluding on November 5 in Hamilton, Ontario.

In 2019, Faulkner dismissed the criticism he received for supposedly trying to look too much like Downing.

"Obviously, you get the [haters] — the 'clone' comments," Richie told the "Let There Be Talk" podcast. "I've got long blond hair, playing a flying V [guitar]… [Michael] Schenker, Zakk [Wylde], K.K., Randy Rhoads — all those guys. To say I was a Ken clone was fairly narrow-minded. There's tons of guys who have flying Vs and long hair.

Three years ago, Downing said that he felt like he was "being cloned" when he first found out he was being replaced by Faulkner. The 69-year-old, who announced his retirement from PRIEST in April 2011 after nearly 42 years in the job, admitted to the "Appetite For Distortion" podcast that he was taken aback when he first saw his replacement.

In a 2011 interview with the Finnish newspaper Ilta-Sanomat, PRIEST singer Rob Halford stated about Faulkner's physical resemblance to a younger Downing: "People are saying, 'It's a clone. You've got some of K.K.'s DNA.' It's just the way it turned out. We made, like, a secret search. When we knew K.K. was not gonna be making the tour, we did a lot of secret, kind of, searching for another player. And Richie just happened to be the guy. And he just happens to look a little bit of the K.K. image, you know?! I think it would be silly to say, 'We looked for a guitar player that looks like Ken.' What we want is a very good metal guitar player, and that's what Richie Faulkner is."