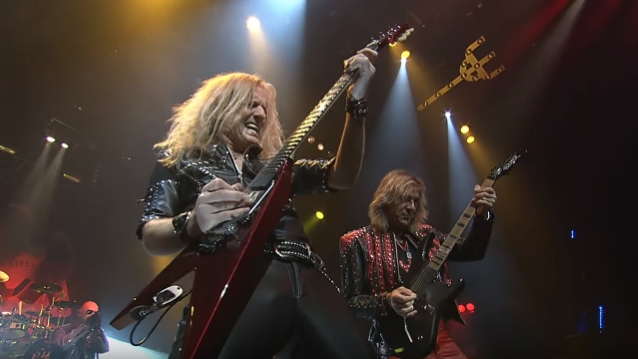 K.K. DOWNING Would 'Absolutely' Perform With JUDAS PRIEST At ROCK AND ROLL HALL OF FAME Induction

Ex-JUDAS PRIEST guitarist K.K. Downing says he is looking forward to putting on a "great performance" when he and his former bandmates reunite at a Rock And Roll Hall Of Fame induction ceremony.

Having been eligible for induction since 1999, JUDAS PRIEST was on the ballot for last year's class of the Rock And Roll Hall Of Fame, but was ultimately left out of the inductee list.

This past October, it was announced that JUDAS PRIEST is among the nominees for the Rock And Roll Hall Of Fame's class of 2020. The top vote-getters will be announced in January and inducted May 2, 2020 at a ceremony at Cleveland's Public Hall.

Speaking to the Rockin' Metal Revival, Downing said that there is a very good chance that he will perform with his former bandmates again if PRIEST gets the nod.

"Oh, I think absolutely," he said (hear audio below). "I mean, why wouldn't you, really? It's a special thing. We're all of an age now. These opportunities only come once in a lifetime. And it seemingly takes a lifetime to get into the Rock And Roll Hall Of Fame. I've always said, there's no such thing as a young legend, right? [Laughs] So, while we're still here, it would be great to receive that accolade and put on a great performance and put that one to bed."

To be eligible for this year's ballot, each nominee's first single or album had to be released in 1994 or earlier.

A voter pool of more than 1,000 artists, historians, journalists and members of the music industry will select the new class. Fans will also have a chance to take part in the process by voting at RockHall.com or an interactive kiosk at the museum in Cleveland.

Halford told Billboard in 2017 that he was not opposed to the idea of reuniting with Downing at the Rock Hall induction ceremony if they were to ever receive the honor. "Everything's on the table for anyone that's been associated with PRIEST in and out of the band," the singer said.

Downing recently said that he reached out to JUDAS PRIEST about taking part in the band's upcoming 50th-anniversary tour but that their response was that they were not interested in including him in the celebrations.