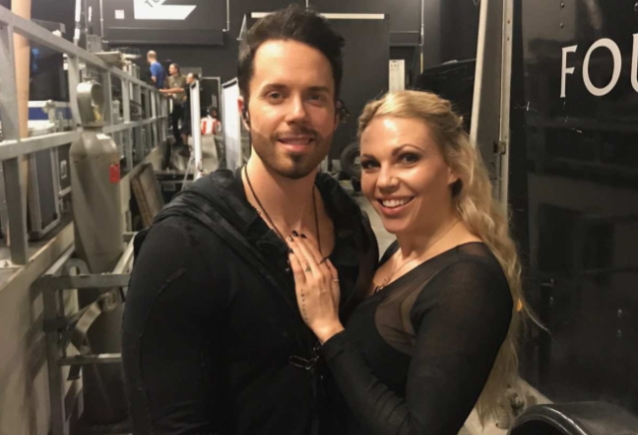 KAMELOT singer Tommy Karevik and KOBRA AND THE LOTUS lead vocalist and songwriter Kobra Paige held a wedding ceremony this past June, more than two years after they were officially married.

Earlier today, Tommy took to his social media to share a few photos from the event, and he included the following message: "On June 25th this happened!! We got to celebrate being man and wife in the presence of close family and friends! It was amazing to get to welcome my mother, sister and the rest of my Swedish family to Canada for the very first time, but so many people travelled far to be there and we are beyond grateful for each and everyone of you. Huge thanks to Kobras mother Susan for all your hard work and planning 5000! Together with Lynn Fletcher Weddings - LFW Events Inc. you created the possibility for us to experience a truly perfect day and we could have never done it without you!"

Kobra, who was born and raised in Calgary, Alberta, Canada as Brittany Paige before officially changing her name, also took to social media to share pictures of the ceremony, and she wrote: "The wedding that finally happened! ! It was intimate and beautiful beyond our imagination. The most meaningful part of that beauty being the presence and love from our close family and friends. It was amazing to finally welcome Tommy's mom, sister, and family from Sweden for the first time. Many travelled from far to be here with us and we felt humbled and beyond grateful for each and every one of you. Thank you to my incredible mother Susan and our incredible wedding planner, Amy Miller @lynnfletcherweddings for their tireless and remarkable efforts in making this experience possible for us!!!"

Karevik and Paige officially tied the knot on April 4, 2020. The couple broke the news of their marriage a couple of weeks later during a joint Facebook Live chat. At the time Kobra said: "[Tommy is] stuck here in Canada [because of the coronavirus crisis], and the wedding was supposed to be in August. But because of everything going on, we had to move the wedding to next year. So we decided, because he's here and we're ready — there's nothing holding us back; it was just the prospect of having our families together that mattered the most. We luckily were able to gather everybody on Zoom. We had my brother in Toronto, my sister in Calgary, his family all across Stockholm and their homes, and my grandparents, of course, in Calgary. And we got married. We're with my parents right now here on the coast, so it was just us two… But it was very intimate."

Added Tommy: "It was beautiful. It was not what we had planned. Also, that's why it was so beautiful, because it was very raw, very honest and very unprepared and emotional. It was awesome."

Karevik and Paige got engaged in June 2019 when he popped the question in his former hometown of Stockholm, Sweden.

Tommy and the Kobra apparently met when KOBRA AND THE LOTUS supported KAMELOT on a European tour in 2015. Since then, Kobra has frequently appeared as a guest vocalist at KAMELOT shows.

On June 25th this happened!! 😍
We got to celebrate being man and wife in the presence of close family and friends! It...