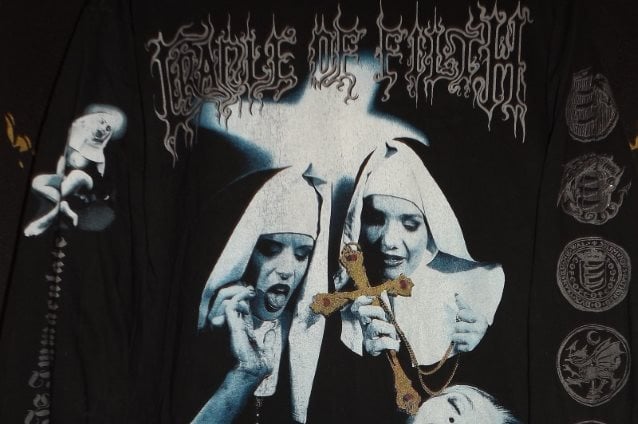 On March 14, Kanye West was photographed wearing a CRADLE OF FILTH long-sleeve shirt as he was exiting Los Angeles restaurant Bandera, less than a day after his cousin, Ricky Anderson (who happens to work for Kanye's record label GOOD Music),tragically lost his 1-year-old son, Avery.

Check out a picture below in a tweet from DailyMail.co.uk.

It didn't take long for CRADLE OF FILTH to react to seeing the rapper sporting a piece of the band's merchandise. The next day, the British extreme metallers posted the above-mentioned photo on Facebook and wrote in an accompanying message: "Kanye West. CRADLE OF FILTH fan. Fortunately not a collaborator."

After Kanye was seen wearing a TESTAMENT t-shirt last December, the band's guitarist Alex Skolnick reacted negatively in an online post, writing: "Goodness gracious. This whole decrepit clan must have picked up a pile of old concert t-shirts (the same pile Kourtney K's SLAYER shirt came from) which have somehow become a 'thing' in trendy fashion (who'd have thought?!!). Inconceivable that any of these pop-culture vultures know who the heck any of the bands are. My guess is he thinks it's a religious group (not the first time that's happened). That is, if he thinks at all, which lately seems unlikely. And I thought this time period couldn't get any weirder..."

Mourning @KanyeWest seen for the first time since the death of his cousin's one-year-old son Avery https://t.co/lXvvkJGjDopic.twitter.com/OIxk73HowO