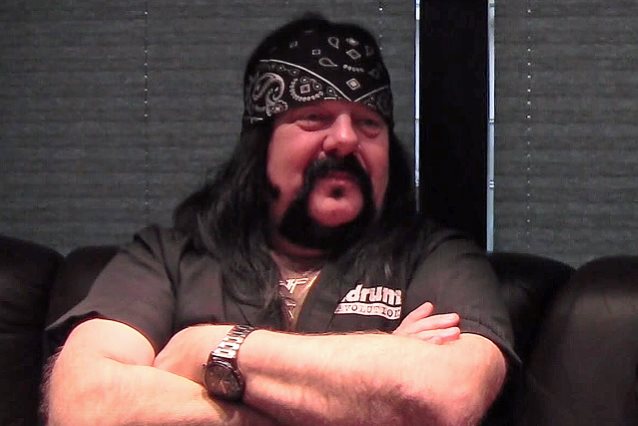 In September 2014, KISS bassist/vocalist Gene Simmons made headlines when he declared in an Esquire article that rock was "finally dead." In the months and years that followed, many a musician has weighed in on the topic in a variety of interviews, with some digging a little deeper into Simmons's full comments and others just glossing over the headline.

In a brand new interview with Italy's Linea Rock, former PANTERA and current HELLYEAH drummer Vinnie Paul Abbott offered his opinion on the topic, saying that rock "will never go away." "I think it's something for [Gene] to say to inspire people to come and prove him wrong," Vinnie Paul explained (see video below) before HELLYEAH played in Milan as the support act for KORN. "I went and saw KISS the other night and it was fucking great, and I felt like a 14-year-old kid. I've probably seen 'em forty times in my life, I know those guys, they're friends of mine, and just still, every time, it feels like a 14-year-old kid when you're there. It's just, like, 'Fuck! 1978 all over again!'"

He continued: "So rock's not dead. It'll never die. It'll never go away. But it goes through phases of popularity, just like anything. When heavy metal was really big in the '80s, it was huge, and then it kind of waned down and kind of came back. I think right now we're kind of seeing a pretty good resurgence of it right now; you can hear a lot of metal bands on the radio in the United States, the shows are doing really well — like tonight, it's completely sold out. So it's not dead, man. I think Gene, really, is just trying to inspire people to come out."

Vinnie Paul also pointed to the live concert performance as a means of financial stability for bands in an age when digital music sales are continuing to fall as the music business inches closer to an access-over-ownership model.

"This is what we do for a living, and honestly, the only thing that we really have left as artists is the live show," Vinnie Paul said. "It doesn't matter if you load it on a DVD, if you videotape it, it doesn't matter. There's nothing more exciting than being at a live show. There's no way they could steal that. That's the most important fucking thing — the live show — and that's why so many bands really focus on that."