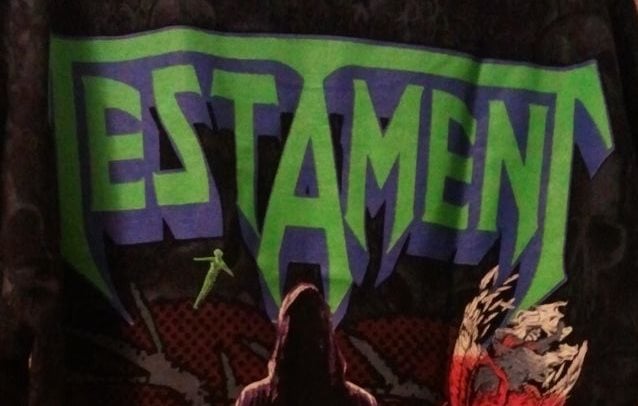 **UPDATE**: TESTAMENT guitarist Alex Skolnick has released the following statement regarding the fact that hip-hop artist and producer Kanye West was photographed wearing a TESTAMENT t-shirt over the weekend:

"Alright. So I posted a wiseass comment meant just for friends who tagged me on Facebook — wasn't meant as an official statement but now it got picked up and is making news. Had I been asked to comment publicly, I'd probably say something more like this:

"I like hip-hop generally and while not a Kanye West fan, I recognize that Kanye is respected by some folks in the music industry whom I respect. Normally I'd be flattered and appreciative from one artist to another (those who follow me outside TESTAMENT know I'm very open musically and work with artists of many genres). If Kanye genuinely knows and likes TESTAMENT — and isn't just wearing our shirt as part of this current bizarre fad among trendy fashionistas and Hollywood types to wear old metal concert tees — then that's great, more power to him and respect. However, I truly doubt that's the case (and would love to be proven wrong).

"It's not the music/artist part of the equation I have a problem with — it is the reality TV, publicity junkie part. Kanye may consider himself an artist, which I can accept (although an artist on the level of those he compares himself to? Pablo Picasso? Sorry, not feeling it). Artistry aside, the Kardashian clan (of which he's a part of by marriage) are not doing art — it is the lowest form of cheap entertainment, turning people into brainless nincompoops and slowly destroying the country, a place that's descended to the point of the majority now embracing anti-intellectualism, denying facts, disbelieving science, believing fake news, avoiding rationality, shunning critical thinking and no longer recognizing the difference between reality and reality TV (case in point: electing a reality TV star as president, someone Kanye is now cozying up to). I find these offenses so unforgivable that I cannot find enjoyment in a major celebrity and artist I'd otherwise respect (musically, at least) wearing our shirt, much as I'd like to.

"So my initial response, while admittedly less eloquent, it is still an honest reflection of the moment."

Kanye West was photographed wearing a TESTAMENT t-shirt as he joined wife Kim Kardashian for dinner Sunday night (December 18) in Santa Monica, California, marking the first time the couple have been seen together since he was hospitalized last month.

Check out a picture below in a tweet from DailyMail.co.uk.

Guitarist Alex Skolnick was the first member of TESTAMENT to react to seeing the rapper sporting a piece of the band's merchandise. He wrote in an online post: "'Oh no he didn't!' Wait, yes he did... Goodness gracious. This whole decrepit clan must have picked up a pile of old concert t-shirts (the same pile Kourtney K's SLAYER shirt came from) which have somehow become a 'thing' in trendy fashion (who'd have thought?!!). Inconceivable that any of these pop-culture vultures know who the heck any of the bands are. My guess is he thinks it's a religious group (not the first time that's happened). That is, if he thinks at all, which lately seems unlikely. And I thought this time period couldn't get any weirder..."

Kanye West and Kim Kardashian seen together for first time since his breakdown https://t.co/FH3gaWqf3Ypic.twitter.com/sgbSNcQgOk