KATATONIA, the Swedish purveyors of dark progressive rock/metal, have announced they will be heading out on a headline tour of North America in March and April 2017 to support the release of their latest studio album, "The Fall Of Hearts".

Founding KATATONIA member and guitarist Anders Nyström comments: "We did three North American tours in support for 'Dead End Kings' and it's been three and a half years since the last one when we toured with CULT OF LUNA, so having already embraced the new cycle of 'The Fall Of Hearts' over here, we are eager to once again cross the Atlantic to continue from where we left off and to reap what we planted over there."

Vocalist Jonas Renkse introduces the bands they have chosen to join them on the tour, saying: "We are very excited to finally announce our headline tour in North America for 'The Fall Of Hearts'. Also invited for this run are post-rock titans CASPIAN and young, promising act UNCURED. Come out and celebrate the downfall of hearts (and everything else) with us."

"The Fall Of Hearts" was released on May 20 via Peaceville. The follow-up to 2012's "Dead End Kings" was recorded at Stockholm's Studio Gröndahl & Tri-lamb studio, and was produced by Anders Nyström and Jonas Renkse. Mixing and mastering duties were carried out by Jens Bogren (OPETH, IHSAHN, DEVIN TOWNSEND) at Fascination Street Studios, with Karl Daniel Lidén (SWITCHBLADE, THE OCEAN, GREENLEAF) brought in as engineer. The dramatic-yet-desolate artwork was created by longtime KATATONIA designer and illustrator Travis Smith.

"The Fall Of Hearts" is the first KATATONIA record to feature new drummer Daniel "Mojjo" Moilanen and recently recruited guitarist Roger Öjersson (TIAMAT),who came in just in time to sprinkle some blistering solos on the album. 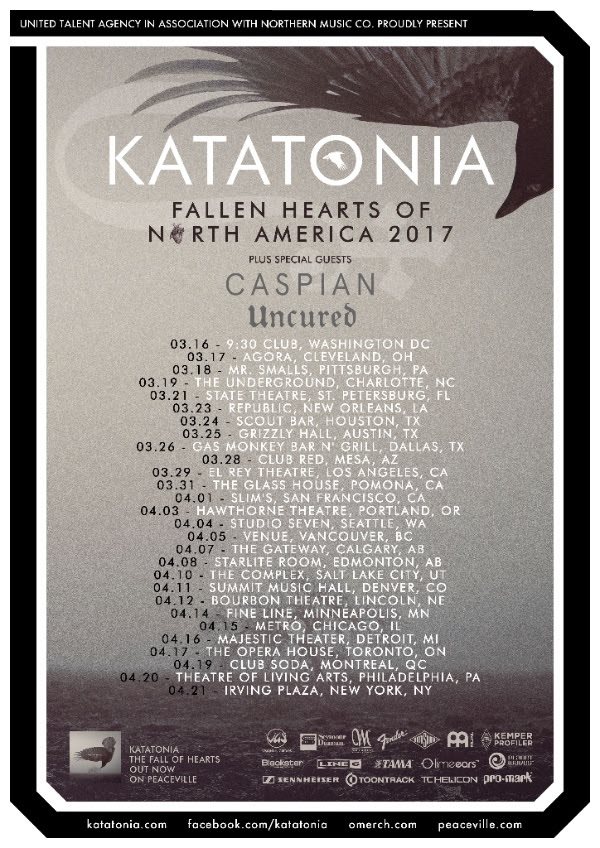