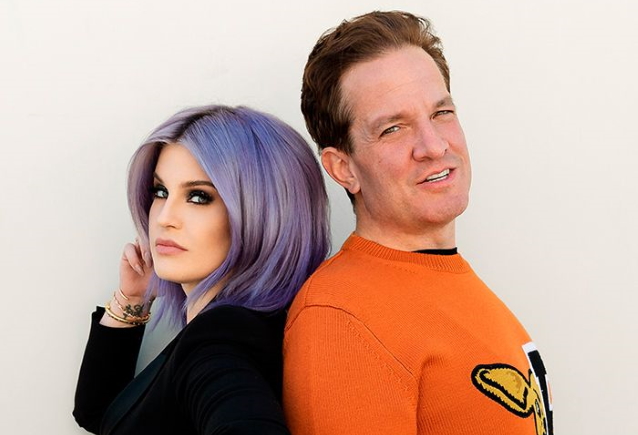 PodcastOne, a leading podcast platform and a subsidiary of LiveXLive Media, announced today that it will launch "The Kelly Osbourne And Jeff Beacher Show", an exciting new podcast and vodcast from pop culture icon Kelly Osbourne and legendary Hollywood and Vegas showman Jeff Beacher. Set to debut on May 4, the weekly podcast will resemble a live theater experience and feature their dynamic and outrageous personalities and uncensored conversations with a diverse list of celebrity guests and famous friends… think Howard Stern meets "The Osbournes". They will discuss everything from the latest current events and crazy shit they saw in the news to fitness, weight loss, fame, stories of inspiration and beyond. Nothing is off limits.

The pair will open up and speak candidly about the recent transformations in their lives; Osbourne revealed she lost 90 pounds after embarking on a journey of clean living and Beacher dropped 260 pounds after taking charge of his life. Osbourne and Beacher will be joined by regular co-host Donny Davis, original star of "Beacher's Madhouse" and one of the most well-known activists for little people. The podcast will record and film from the penthouse of the iconic Hollywood Roosevelt Hotel which is the former home to "Beacher's Madhouse" theatre.

"I strive to be inclusive in everything I do. I want to include every single unique group. What some may have called freaks, we call family," said Osbourne, and her wild stories and infectious laugh will spark a smile on anyone who listens. "After having the #1 live theater show in the world for decades, my dream was always to be a talk show and radio host," said Beacher. "This podcast is going to be an exciting combination of both audio and video — bringing the live theater experience into everyone's home. Our podcast is going to be in the top 10 list by next year."

"Kelly and Jeff together are a showstopping dynamic. We couldn't be more excited to welcome them to PodcastOne and know that their show will be destination programming for podcast audiences," said Kit Gray, president of PodcastOne.

"The Kelly Osbourne And Jeff Beacher Show" will continue the exciting creativity, unique circus-like atmosphere and compelling conversation that happens when these two minds meet, updated with a 2021 lens. The podcast will be available on PodcastOne, Amazon, Apple, Spotify and wherever podcasts are heard and the vodcast will be seen on LiveXLive.

Kelly Osbourne is an actress, television personality, host, author, fashion designer and singer who became a household name when she starred with her family in the groundbreaking MTV reality series "The Osbournes". She solidified her place in pop culture as one of the outspoken hosts of E!'s "Fashion Police" and has appeared as a contestant on ABC smash "Dancing With The Stars", and as a judge on both "Australia's Got Talent" and "Project Runway Junior". In 2017, she published her latest book "There Is No F*cking Secret: Letters From A Badass Bitch". Osbourne has been a longtime supporter and ally to the LGBTQ+ community, partnering with various organizations like The Trevor Project to shed a light on the discrimination faced by the queer community worldwide. She has always encouraged people to just be themselves, to have pride in who they are and unite together.

Jeff Beacher is a legendary Hollywood and Vegas showman known for creating the infamous "Beacher's Madhouse", the outrageously sexy, original, and iconic Vaudeville-inspired entertainment experience. The live stage show within a nightclub featured over a dozen variety acts nightly and pushed the boundaries of sexuality, entertainment, fantasy and innocence with a groundbreaking lineup of the most diverse performers in the world including burlesque dancers, acrobats, contortionists, fire-breathers and more. From Broadway, to Las Vegas, to Hollywood, "Beacher's Madhouse" was always one of the most talked about shows. Named "The Greatest Showman On The Strip" (Rolling Stone),Beacher was the first residency show at the Hard Rock Hotel & Casino in Las Vegas and the youngest headliner in the city's history. "Beacher's Madhouse" became the first headlining show at the legendary Roosevelt Hotel in Los Angeles, bringing in the world's biggest stars to the audience. He recently went through a pivotal change in his life and lost 260 pounds, transforming his mind, body and soul. He has shown that he can recreate the steps to success over and over again and is living proof that people can constantly change and evolve. Now, he's taking his mantra and using it to inspire and motivate others.