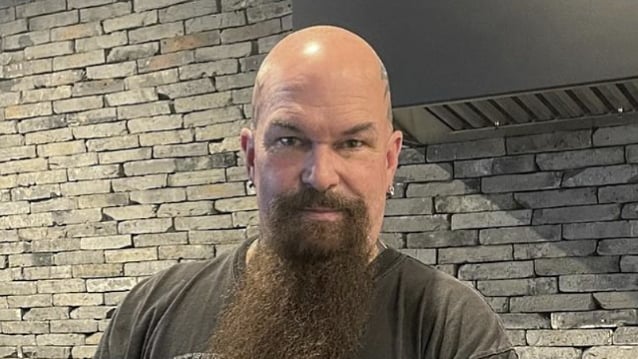 Kerry King spoke to Metal Hammer magazine about his post-SLAYER project, saying that "won't be dragging [his] feet much longer" when it comes to going back on the road.

Nearly two years after he revealed that he had more than two records' worth of music written for his new band, King stated about the new material's direction: "You know me, so you know what it's going to sound like. I played this new song for a buddy, and I said to him, 'If there's anything I've written in the last few years that sounds like SLAYER, it's this.' And he said, 'That sounds like you could have pulled it off of any SLAYER record.' I actually made that riff up backstage at a SLAYER show. We were walking to the stage and I got my phone out and recorded it so I wouldn't forget it."

While King was reluctant to reveal the rest of the lineup of his new band, he confirmed the involvement of former SLAYER drummer Paul Bostaph.

"We just started rehearsing and the only person I can give away is Paul because I took him from SLAYER and we work very well together," the 58-year-old guitarist said. "We didn't start rehearsing until the end of March, and that was the first time since that last SLAYER show at the end of 2019 that me and Paul finally got into a room together."

King went on to say that he expects his new band to start out by playing "much smaller" venues than SLAYER did at the end of its four-decade run.

"Had it have been up to me then I'd have been out in 2020," he said. "But that thing called the pandemic fucked everything up for everyone. You know, I waited on that, because it had to run its course. I didn't want to be the guinea pig; I didn't want to learn how to tour again. I already did my dues; I don't want to have to prove myself again.

SLAYER played the final show of its farewell tour in November 2019 at the Forum in Los Angeles. One day later, Kerry's wife Ayesha King said that there is "not a chance in hell" that the thrash metal icons will reunite for more live appearances. In August 2020, she once again shot down the possibility of her husband and bassist/vocalist Tom Araya sharing the stage ever again under the SLAYER banner.

That same month, Bostaph confirmed that he is involved in a brand new project headed up by Kerry. Paul told Australia's Riff Crew that the new band will "sound like SLAYER without it being SLAYER — but not intentionally so. I mean, Kerry's been writing songs in SLAYER his entire career, and he has a style," he explained. "And that style, as a songwriter, you just don't change your style because your band is done… So, all I can say is if you like heavy music and you like SLAYER, you'll like this."