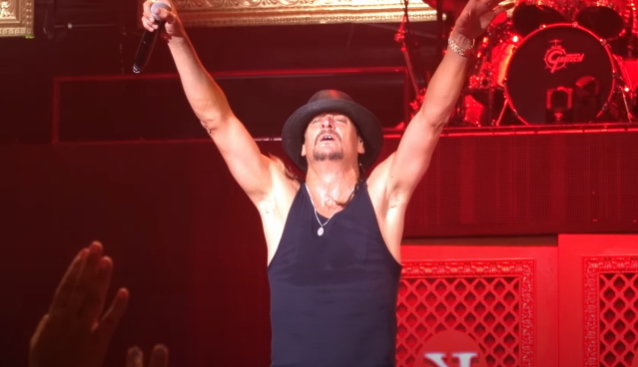 According to TMZ, chaos ensued after Kid Rock canceled his performance at the North Dakota State Fair on Friday (July 22),citing concerns over weather conditions.

The decision to call off the show was made around 10:30 p.m., at which time Ward County Sheriff Bob Roed took the stage to tell the roughly 18,000 fans that the show would not go on.

KFYR reported that some fans who had been waiting hours for the performance began throwing bottles out of frustration, with one guy climbing onto the stage and taking a threatening stance before security tackled him.
Another man was handcuffed and led away by the police. Eventually the crowd began to disperse.

Earlier in the night, opening act NIGHT RANGER played an extended set at the event.

Kid Rock later took to his Twitter to express his disappointment at not being able to play the show, writing: "SO PISSED OFF we could not play for a sold out crowd tonight in Minot, ND (because of high winds) - I know it sucks but none of us can control mother nature. Please be safe leaving and take care of each other."

The North Dakota State Fair also released a statement regarding the cancelation of the performance.

"Due to the safety concerns of the high winds, lightning, and severe weather in the area, the Kid Rock concert had to be cancelled," the statement read. "The North Dakota State Fair will be issuing refunds to all ticket purchasers."

A tornado warning went into effect across a few northern North Dakota counties during the 9 o'clock hour, and there were reports of wind damage north of Minot around the time of the planned concert.

A number of angry fans posted comments on social media, noting that carnival rides were not shut down by the weather and that NIGHT RANGER still played.

Kid Rock is currently promoting his new album, "Bad Reputation", which was made available digitally on March 21. Physical CDs arrived on April 6.

People reported waiting for more than 90 minutes before abruptly getting word the show will not happen.
.
.
.
.
Video: David

North Dakota Is pissed at Kid Rock! Cancelled because of  🤷‍♀️….WTF!!! 🤬
We were all pissed off!!!

Viewer video appears to show someone In handcuffs on the stage shortly after The Kid Rock concert was canceled at the North Dakota State Fair.

This is just some of the many many people and there is still plenty more people coming as well here at the Kid Rock Concert at the North Dakota State Fair!!!!! Let's Go Brandon

SO PISSED OFF we could not play for a sold out crowd tonight in Minot, ND (because of high winds) - I know it sucks but none of us can control mother nature. Please be safe leaving and take care of each other. -Kid Rock