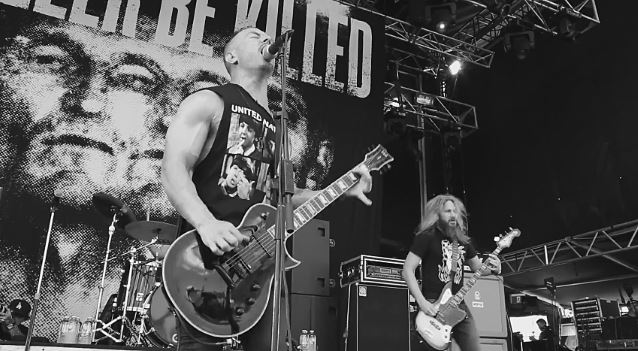 "Curb Crusher", the new video from KILLER BE KILLED, the band comprised of Max Cavalera (SOULFLY, ex-SEPULTURA),Greg Puciato (THE DILLINGER ESCAPE PLAN) and Troy Sanders (MASTODON),can be seen below. Directed by Melbourne photographer
Neal Walters, the video combines a wealth of behind-the-scenes and live footage captured in Australia, where KILLER BE KILLED made its international debut at last month's Soundwave festival and "Sidewave" club shows.

For their live debut, Cavalera, Sanders and Puciato were joined by Juan Montoya (MONSTRO, ex-TORCHE),who also performed on the KILLER BE KILLED debut album, and Ben Koller (CONVERGE, ALL PIGS MUST DIE, MUTOID MAN).

Drummer Dave Elitch (ex-THE MARS VOLTA) played on KILLER BE KILLED's CD but was unable to perform with the band at Soundwave due to scheduling conflicts with his other group, ANTEMASQUE.