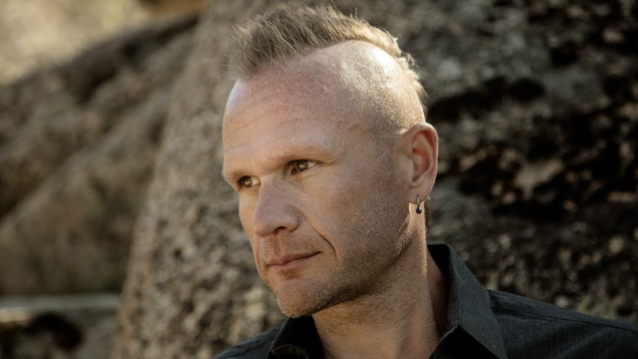 KILLSWITCH ENGAGE's ADAM DUTKIEWICZ Opens Up About His Pandemic Depression: 'This Was The Worst Year Of My Life'

During an appearance on a recent episode of "Stoke The Fire", the alternative lifestyle and culture podcast hosted by musician Jesse Leach (KILLSWITCH ENGAGE) and DJ/presenter Matt Stocks ("Life In The Stocks"),KILLSWITCH ENGAGE guitarist Adam Dutkiewicz opened up about the depressive symptoms he experienced as a result of the coronavirus pandemic.

"It started out almost as thinking it was gonna be a good thing for my headspace," Adam said (as transcribed by BLABBERMOUTH.NET). "I remember we got on a conference call with management [at the beginning of the pandemic], and I'm, like, 'Yeah! We get a break! We finally get a break! COVID forever!' [Laughs] I was, like, 'This is gonna be great. We'll take some time and we'll take care of ourselves, and when we get back we'll be in an even more positive headspace. And we'll tour non-stop when we get back to it.' And then I think once the realization of 'COVID's not going anywhere' hit, I was, like, 'Oh, no. Oh, no.' And then the loneliness. My girlfriend works, like, 12-hour days, so I never fucking see her. So the loneliness started eating me alive. Getting injured again — I hurt my back really bad again. Going to the hospital — all that shit. Fuck, I was [on a] downward spiral.

"I guess I never really realized how dependent I am on human interaction after all," Adam continued. "I get so burnt out on it being on tour, because you're always around other people, so I always just thought I preferred being alone. And then when I was alone for that long, just completely by myself, I fucking went crazy."

Dutkiewicz went on to say that the coronavirus pandemic and restrictions had a more severe impact on him that he ever anticipated.

"This was, without a doubt, the worst year of my life — a hundred percent," he said. "I'd never gone to such a dark place ever before. I'm glad that I've finally pulled out of it, and the promise of good things coming was really the catalyst for that. Being able to see people, getting vaccinated and then being able to go out and things opening again, and all the [coronavirus] rates dropping. Now life is pretty much back to normal where I'm living. And it's just amazing to see people again. I was so scared to go home and see my family because of my grandmother — she was not doing well, so I didn't wanna be the reason that somebody in my family got sick and then gave her something. It's just so nice to have some sense of normalcy back, and I think that's really helped me out a lot."

According to Adam, nothing positive has come out of the pandemic in his life. "It's kind of fucked up. The only thing I really took from it is that I never want to go through anything like that again," he said. "And it's so funny — I know Jesse talks about depression and anxiety all the time, which runs in my family. Every one of my siblings has had to deal with something. And they're either on some form of medication or they have to do some form of crazy meditation to keep their thoughts at bay. I never truly experienced the depth of it until this last year and how controlling it can be. I always just assumed, like, 'Just have a fucking beer and have a chat with a good friend, and it'll help fix things.' And from what I went through last year, I realized now nothing fixes it — nothing fixes it. It's like the most hopeless feeling you could ever have. It's really fucking crazy. And I truly know now what it means to be depressed."

Last month, Dutkiewicz and Leach released the second album from their TIMES OF GRACE project, "Songs Of Loss And Separation", via the band's own imprint label, Wicked Good Records, distributed by ADA Worldwide.